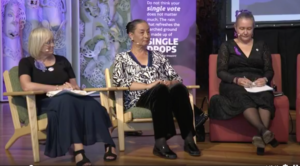 In celebration of International Women’s Day, and in conjunction with New Zealand’s 125th anniversary of women’s suffrage, the Ministry of Women and Te Papa (The National Museum of New Zealand) put together an all-star panel of women leaders and influencers. All of the panel’s speakers have in some way significantly contributed to the furtherance of women’s and girl’s rights.

One of the women in attendance was the Honourable Julie Anne Genter. Julie has served in Parliament since 2009, and upon the coalition of the Labour and New Zealand First parties (supported by the Green party), Julie was appointed to the role of Minister for Women. She also is the second woman holding a parliamentary seat while pregnant, alongside Prime Minister Jacinda Ardern. Alongside Julie’s attendance was fellow (ex)politician Georgia Beyer, who became both New Zealand’s and the world’s first openly transgender woman to be elected to Parliament. As a previous sex worker, Georgia is a leader who continues to fight for rights for women and the LGBTQ community.

The last female panelist was Vanisa Dhiru, an executive in the not-for-profit sector in New Zealand. In 2017, she became the President of the National Council of Women of New Zealand (founded in 1896) and has served on the boards of numerous charities.

Throughout the panel, questions came from both the crowd and the panel liaison, Radio New Zealand’s RNZ’s Megan Whelan. Some questions were imaginative and others hard-pressing, meaning this panel was an enjoyable experience and a small look into the lives of these influencers.