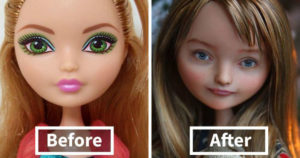 ‘I’m all I want to be’ – sang Courtney Love on the opening track of Hole’s 1994 album Celebrity Skin. As I began to edit this month’s issue of GNI, I was bursting with pride for the solidarity shown for our sisters in Ireland, evidenced by their landslide victory to dismantle a completely antiquated law that DENIED women their birth-right to have control of their own bodies. I knew that I wanted this victory to be at the forefront of this issue, which seeks to celebrate young women all over the world who are regaining control of their bodies, appearance, and with this, their entire future.

Browsing the articles in this month’s issue of GNI, I was reminded of Love’s refrain, and wondered if, now over a decade on, girls are ‘all they want to be’? Indeed, we are certainly taking steps in the right direction, I thought, when I came across the following fem-positive response, made by Ukrainian artist, Olga Kamenetskaya, ‘Real beauty is a breath of fresh air in a world of unrealistic standards and photoshop mania’. Beginning as a hobby, Kamenetskaya’s unique art work involves removing the make-up from the faces of Barbie dolls, bring them back to life in a more realistic and relatable way. The article continues, ‘[Kamenetskaya] turns mass-produced dolls like Barbies and Monster High girls into totally new, unique and one-of-a-kind dolls. They resemble real people, and each one of them has their own ‘flaws’—sounds good to me!

There is, as always, still a long way to go; it is also clear from this month’s headlines that there are some young women who are not celebrating such a fem-postive show of solidarity and are instead alienated, acting out in damaging ways. I was deeply disheartened this week to read of eighteen-year-old, Safaa Bouler, who has been found guilty of plotting a terror attack in London. Sadly, this means Safaa is one of the youngest females to be charged with terrorism offences: an all-female terroist plot is NOT the reason we want young women to be in the headlines.

Here at GNI we want to forge positive, inclusive, healthy and happy female responses and experiences and we continue to work hard to make such paths available: Let’s move away from cycles of hate, blame and shame and work together to be all we want to be.