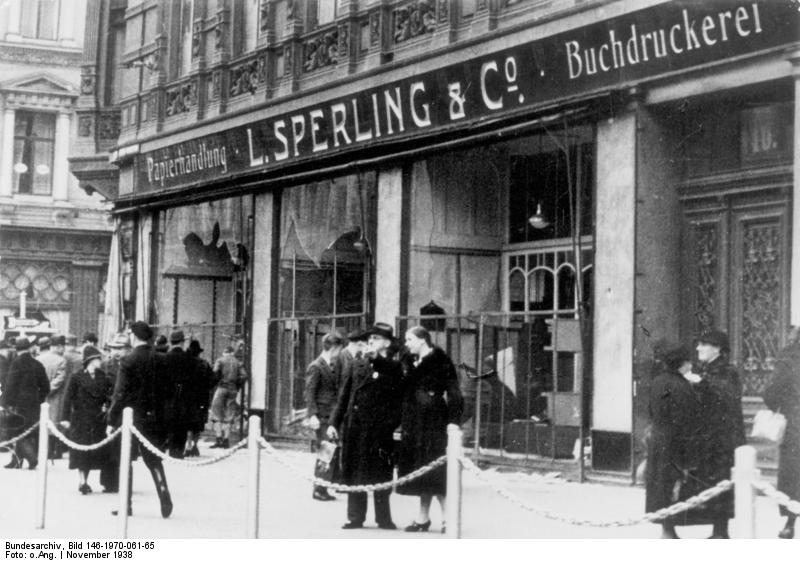 Earlier this month, I was roaming the streets of Leipzig, Germany, my friend’s small daughter tightly clutching my hand as we made our way down the packed high street. As we passed the town hall, her eyes fell on a poster hanging from the building. A large black and white photo next to white writing showed a synagogue, fully ablaze, and the little girl stopped to have a closer look. Still not quite literate at her young age, she asked me to read to her what it said— “Inhumanity starts with words”.

‘What does that mean?’ She wanted to know. So I tried to explain to her what had happened on the 9th November 1938, while the people around us were busy with Christmas shopping and simply ignored the uncomfortable reminder that hung above our heads. As night fell on that date, Nazi troops started smashing in shop windows of Jewish owners, smeared the walls with the Star of David and slogans such as “Germans, resist! Do not buy from Jews!” During that night more than 1400 synagogues were set on fire, and by the time the sun had risen on 10th November, 400 Jews had lost their lives and only ash and rubble were left from the sacred buildings. The little girl listened carefully and when I finished, she said: ‘I don’t understand. It doesn’t matter what God you like, right?’

She is too young to realise how the tone in politics and society has changed over the last few years. Ruth Winkelmann, The Girl Who Witnessed Kristallnacht, ‘The Night of Shattered Glass’, was only a little bit older than this young girl when her family was ripped apart by the Nazis. She too didn’t understand politics at this age, but she felt the outcome in the most brutal way. Inhumanity starts with words. We are experiencing verbalised inhumanity right now, and so many of us feel safe, because we live in democracies, and 1938 can never happen again, right? It’s not exactly fair to compare the Germany of 1932, just before the Nazis came to power, and today’s Germany. Two completely different states, and still some admonishers call us to be alert, to never again let words lead to physical violence.

While I write this, physical violence against immigrants and people of different faiths has already happened. Not only in Germany, but everywhere. Nationalism is on the rise, so is Xenophobia. We cannot ignore the mass shooting that killed 11 Jewish people in the Squirrel Hill Synagogue in Pittsburgh, Pennsylvania, USA. We who always thought we could never get near 1933 again have witnessed an openly right-wing extremist party take the seats in our historic parliament building – a building that mysteriously caught fire in 1933 just after the Nazis won the election, and that fire gave them an opportunity to lash out against all their opponents.

‘It doesn’t matter which God you like, right?’ The little girl repeats, tugging on my hand for an answer. ‘No, it doesn’t. You are absolutely correct. Don’t let anyone keep you away from people you like, just because they look or dress or pray differently.’ I tell her, and we continue to make our way through the crowd. As long as there are children who put their common sense and open heart to use, there is still hope. Maybe we grown-ups should take a page out of their book.