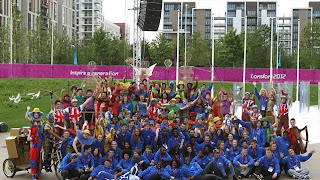 A warm welcome for the athletes.
http://www.london2012.com/spectators/ceremonies/opening-ceremony/
With just over a week until the Olympics start here in the UK, it’s pretty safe to say that the festivities and competitions–along with the attendant controversies such events bring–are at the forefront of everyone’s mind. Despite concerns about security,¬†rooftop installations of surface-to-air missiles on residential blocks of flats for the duration of the Games, athletes getting lost on the way to the Olympic Village from the airport, ¬†and distress about the weather (the UK has received record-breaking amounts of rain this “summer”), people are excited for the competitions to start.
The 2012 Olympics feature a variety of positive notes for women. For the first time, the US Olympic team is sending more women than men as competitors: the US team of 530 consists of¬†269 women and 261 men, and the athletes will compete in 25 out of the 38 Olympic disciplines.
For the first time ever, Saudi Arabia, Qatar, and Brunei are sending female athletes. The 2012 Olympics marks the first time every competing country has at least one female competitor.
Afghanistan is sending women to the Olympics for only the second time, and¬†Sadaf Rahimi is one of Afghanistan’s first female boxers, competing in another first: Women’s Boxing as an Olympic sport.
In many ways the 2012 London Olympics are being touted as the “Women’s Games.” Not only will every competing country have female entrants, but with boxing now open to women, all the Olympic disciplines are available for women to compete in (men cannot compete in rhythmic gymnastics or synchronized swimming). Just under half of the approximately 10,000 athletes are women, compared to just 42% at the 2008 Beijing games. It is also thought that the female athletes competing for Great Britain will win more medals than the British male athletes, which would be another first.
Behind the scenes, 20 of the 106 members of the International Olympic Committee are women–less than 20%, but 20% more than there prior to 1981. The London Organizing Committee is more than half female, and Debbie Jevans, the Director of Sport, is the first woman to hold that title in the history of the Games.
All in all, the London 2012 Olympics are breaking down barriers for female athletes around the world, and I for one will be supporting athletes like Sadaf Rahimi (Afghanistan, boxing), Jessica Ennis (Great Britain, track & field),¬†Allyson Felix (USA, track & field),¬†Mariel Zagunis (USA, Fencing), Lolo Jones (USA, track & field),¬†Kerri Walsh and Misty May Treanor (USA, beach volleyball),¬†Dara Torres (USA, swimming), Kim Rhode (USA, shooting),¬†Wodjan Ali Seraj Abdulrahim Shahrkhani (Saudi Arabia, judo), Sarah Attar (Saudi Arabia, track & field),¬†Maziah Mahusin (Brunei,¬†track & field), Nada Arkaji (Qatar,¬†swimming), Noor Al-Malki (Qatar, track & field), Aya Magdy (Qatar,¬†table tennis) and Bahiya Al-Hamad (Qatar,¬†shooting, also carrying the flag for Qatar),¬†and all the other women competing for themselves and their countries this summer!
-Katie Weidmann
Junior Girl
Girl Museum Inc.