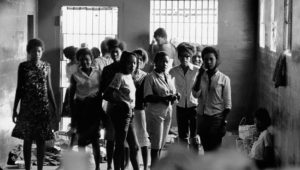 On this day 55 years ago, a group of girls, aged eleven to fifteen, were abducted by the police and unlawfully imprisoned in a condemned stockade for taking part in a peaceful protest. The girls were subjected to inhumane conditions and unable to contact their families for rescue. Yet their courage and tenacity helped them to navigate this life-changing experience.

On July 19th 1963, the Student Non-Violent Coordinating Committee collaborated with the National Association for the Advancement of Colored People (NAACP) to organize a protest march in Americus, Georgia. It involved marching from the Friendship Baptist Church to a segregated movie theatre, where the protesters would join the line and buy tickets. A contingent of the protesters were pre-teen and teenage girls. The police descended on the street outside the theatre and savagely targeted the protesters with clubs, fire hoses and attack dogs. One of the girls, Lulu Westbrook, was clubbed in the head by a police officer – a wound which, it turned out, would receive no medical attention for weeks.

“I had snuck away from home. My mama didn’t know where I was because they was not home. And here I am being arrested.” – Shirley Reese, age 14

The girls were taken to the town of Dawson, 30 miles from Americus, where they spent the night in jail. For many of them, it was not their first night in a cell, since it was common to arrest black children who were protesting. Shortly thereafter was when their horror truly began.

The girls were packed into a windowless van and driven away without any confirmation of where they were headed. In her memoir, Up Above My Head: I See Freedom in the Air, Carol Seay recalls how they were driven out to an isolated rural area that reminded her of the jungles in Tarzan films. Finally, the bus pulled up outside a dilapidated one-story building with barred windows, situated in the middle of a field. The girls were ordered inside, and found that the interior comprised one narrow cell, twelve feet by forty feet. It was oppressively hot and infested with spiders and cockroaches. There was no furniture other than a pile of decomposing mattresses stacked in a corner, with itchy green wool army blankets covered in cigarette burns.

“No one wanted to sit down or even touch the walls.” – Carol Seay

The smell of mildew and urine was so powerful that several girls began to vomit. Those who could keep from vomiting investigated the cell, finding an adjacent bathroom with a broken shower and a toilet that would not flush. It became clear that other than the constant dripping of warm water from the shower head, there was no running water in the stockade.

“Well, since we have been given a lemon, we are going to make the best damn lemonade the world has even tasted.” – Sandra Russell, age 12

The next day, when the girls woke, they began trying to make the best of their dire situation. They asked the guard for a broom so that they could clean away the dirt and broken glass that littered the floor, and remove the spiderwebs that blanketed the smashed windows. It was then that they learned that they were prisoners in a condemned Civil War era stockade located in Leesburg, Georgia, about twenty-five miles south of their hometown of Americus. They had not been taken far from home, but had no way of contacting their loved ones.

Hours passed before Mr. Storey, the Leesburg dogcatcher, arrived with the girls’ first food: undercooked hamburgers, charred on the edges and raw inside. In the days that followed, they would eat a combination of hamburgers and rancid egg salad sandwiches. Carol recalls that she tried to stave off food poisoning by only nibbling on the burnt edges of the burgers.

The girls’ bravery would have been remarkable even if they had been held in the stockade for a matter of days. As it turned out, their unlawful incarceration would last months. The stolen girls were mostly guarded by an elderly white man, Mr. Countryman, who they called “Pops.” He was not as hateful as some of the other guards, but was unwilling or unable to give them any assistance outside of passing them some tin cups to make drinking from the shower head easier.

The putrid food inevitably made the girls horribly ill with diarrhea or vomiting. Since the toilet would not flush, they tried to relieve themselves over the shower drain. When it became clear that this could not serve as a long-term solution because the broken shower would not allow them to wash away the accumulating filth, they were forced to relieve themselves into the cardboard hamburger containers, which were not taken away for days at a time. After several weeks in the stockade, girls’ menstrual cycles began. Without access to supplies, they were forced to rip strips off their dresses to serve as sanitary napkins. Their wounds from the protest had yet to be tended.

The guards taunted the girls, jeering that they would never “waste their white time” organizing a doctor for black girls. They subjected the girls to racial slurs and pointed guns at them to scare them into quieting down. To the girls’ bewilderment, the guards eventually brought more teenage girls to the stockade, and their numbers nearly doubled.

The girls banded together to keep themselves safe in any way they could. Since they had no idea if the guards would try to hurt them when they were asleep, they organized to sleep in shifts, so that at least half of the girls were awake at every hour of the day. Even if they had no weapons, they would not allow themselves to be ambushed.

They also tried to find ways to distract themselves so that they did not crack under the strain of captivity. Since all of the girls were religious, they would conduct group prayers every day. Those who had grown up in the church would preach to the others, basing their sermons on the ones they had heard their older relatives give. They played cards and gossipped as though they were on the playground at school. The girls sang freedom songs, such as This Little Light of Mine, as well as their favourite pop songs from the radio. They put on talent shows to amuse each other. They also discussed their hopes for the future, both personal and political. According to Carol Seay, they tried their best not to hope that this day was the one they would be released, because as the days turned to weeks and the weeks to months, they were inevitably disappointed.

12-year-old Sandra Russell was small for her age and so Mr. Countryman felt sorry for her. He offered to bring her out of the stockade into his office to talk with him and eat a proper breakfast. The older girls were fearful, and they advised Sandra on how to defend herself if he tried to hurt her. Luckily, Mr. Countryman did not attempt to harm Sandra. She brought scraps of her breakfast back to the stockade to share with the other girls. After several visits to the guard’s office, she surreptitiously gave the contact details of several girls’ families to Mr. Storey, who contacted them for her.

Incredibly, once the girls’ families had been made aware of their whereabouts, the jailers demanded that each girl’s family pay $2 per day to cover her room and board in the stockade. The more middle-class parents of stolen girls could afford to bribe the guards to release their daughters. The poorer girls had no option but to stay in the stockade.

After months in the stockade, the girls heard a car pull up – a distinctive sound in the early 1960s. As one African American man began chatting to the guard, they saw a young white man sneak out of the car and come quietly over to one of the stockade windows. The young man introduced himself to the girls as Danny Lyon. He told them that he was from SNCC and needed to take photos to prove that they were being held illegally and in inhumane conditions. The girls understood that this might be their one chance for freedom, and mobilised quickly. Some girls went to the door of the stockade to watch for the guard and distract him if necessary. The other girls posed for the pictures that Danny Lyon suggested, which included Lulu Westbrook and Willie Mae Smith lying on the floor as though they were asleep. Danny Lyon also documented the broken toilet and shower and the rough, grimy floor of the stockade. The girls also took group photos, with Sandra Russell making the conscious decision to smile and put her hand on her hip so that her mother would not be too worried about her. Billie Jo Thornton and Shirley Reese were both the subjects of photos that showed them clutching the bars and smiling determinedly.

Danny Lyon’s photos were published in a number of black-owned newspapers and magazines, including the September 1963 issue of Jet. After national outcry, the girls were released to their families with stern instructions from judges not to participate in any more protests — effectively blaming the girls for the abuse they had suffered and absolving the police and guards of responsibility. Carol Seay was instructed to keep away from protests and other “mess.” She was so outraged that she retorted, “Mess? What mess?” as her mother tried frantically to shush her.

After being released, Sandra Russell returned to her school to start sixth grade. Sandra suffered teasing from her classmates, who cracked jokes about her being a “jailbird.” She felt that she had outgrown the children she had known before her time in the stockade.

It was easy for the girls to feel that they had done something wrong and been justly punished. Even when the girls encountered each other in the years that followed, they did not mention their ordeal out loud, but felt a silent understanding of one another. The shame followed them into adulthood: as a young woman in college, Shirley Reese was flooded with embarrassment when she spotted a picture of herself inside the stockade in a library book.

The racists who abducted and imprisoned the girls might have discouraged them from taking part in protests, but could not prevent them from continuing to make the world a better place. Shirley Reese, for example, resolved that she would “view this as a challenge to not let it control my entire life.” Shirley Reese, now Shirley Green-Reese, and Carol Seay, now Carol Barner-Seay, have both achieved their doctorates. Dr Shirley Green-Reese now serves on the city council for Americus. In 2015, Shirley began to speak publicly about her experience for the first time.

For more on the Leesburg Stockade story, and the context of its importance in Civil Rights history, listen to our podcast.