A Girl at the Oscars! 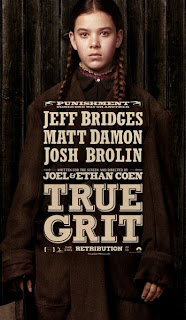 This week the Academy of Motion Picture Arts and Sciences announced its nominees for the 83rd Academy Awards.¬† You‚Äôll find many Hollywood stars and seasoned actors¬† on the list, but also a nomination for 14-year-old Hailee Steinfeld as Best Supporting Actress for¬†True Grit.

True Grit is a remake of a 1969 John Wayne movie.¬† It revolves around a girl named Mattie (Hailee‚Äôs character), who hires a mercenary named Rooster Cogburn to track down the man that killed her father.¬† Mattie insists on accompanying Cogburn on his mission to find the killer, despite the advice of many people to wait quietly at home.¬† On the course of their journey, Mattie proves she has ‚Äútrue grit‚Äù by helping Cogburn track down the killer and eventually fighting back when she meets the man.
When the movie was originally made, some felt it was not an entirely faithful adaptation of the Charles Portis novel it was based on.¬† The book is narrated by Mattie as a woman looking back on her childhood, but the John Wayne version focused more on the adventures of Cogburn and his sidekicks.¬† In contrast, this version of True Grit stays more faithful to Mattie‚Äôs narrative process, delivering the story back into the hands of a 14-year-old girl.
Hailee isn‚Äôt the first girl nominated for an Oscar, or even the youngest.¬† Tatum O‚ÄôNeal won the Best Supporting Actress Oscar in 1973 for her role in Paper Moon, making her the youngest person ever to win an Oscar. At just a year older, Anna Paquin won the 1993 Best Supporting Actress Oscar for The Piano.¬† A handful of 10-year-old girls have earned Best Supporting Actress nominations:¬† Mary Badham in the 1962 adaptation of To Kill a Mockingbird, Quinn Cummings in 1977‚Äôs The Goodbye Girl, and Abigail Breslin in Little Miss Sunshine in 2006.¬† ¬†In addition, several other girls have also scored Best Supporting Actress Nominations throughout the years ‚Äì Bonita Granville in These Three in 1936, Patty McCormack in 1955‚Äôs The Bad Seed, Linda Blair in The Exorcist in 1973, Jodie Foster in Taxi Driver in 1976,¬† and most recently Saorise Ronan in 2007‚Äôs Atonement.¬† In the Best Actress category, Keisha Castle-Hughes remains the only girl to have ever earned a nomination, for Whale Rider in 2002.
Let’s wish Hailee good luck, and hope she takes home a trophy on February 27th!