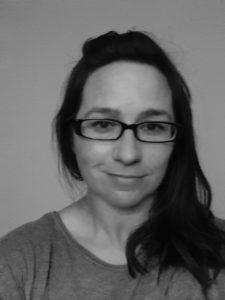 I am a media researcher, and my research looks at how people remember their favourite television programmes, and to think about how this has been important for their identity. As part of this research, I interviewed women aged between 42 and 95 about their favourite programmes, and a lot of the women talked about the music shows that they enjoyed watching as teenagers. They particularly liked to talk about how much they admired and wanted to be like two of the female presenters of these programmes; Cathy McGowan who presented Ready, Steady, Go! A music show that was broadcast between 1963 and 1966 on ITV, and Paula Yates who presented the Channel 4 show The Tube between 1982 and 1987.

The women talked about this period of their lives and these shows as a time of ‘trying out’ femininities. Cathy McGowan and Paul Yates were described as strong, confident female presenters who helped them to construct their own ideas of what it means to be a woman.  The presence of young women acting with a confident and modern femininity on television and presenting alternative ways of being a woman on mainstream television made them important role models.

This got me thinking about my own role models while I was growing up, about the women who I saw in popular culture and who made me think about the sort of woman I wanted to be. Looking back, I realise that there were two performances of alternative womanhood that have influenced me. Like the women in my own research, these also came from the world of music and, also like the women I interviewed, my love of these women emerged from the fact that they were totally different to the older women in my own life. I grew up in a very traditional home, with parents who had different expectations of behaviour for me and my younger brother. I had to be ‘good’ and I was expected to behave in what they considered an appropriately feminine manner. 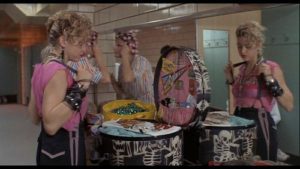 The first of these representations was Madonna in the 1987 film Desperately Seeking Susan. It’s a comedy starring Rosanna Arquette as Roberta, a bored housewife who through a series of events ends up taking on the persona of Susan, a Bohemian young woman with a kooky dress sense played by Madonna.  I first saw this film at a friend’s birthday party when I was about twelve years old. I was familiar with Madonna as a music star, and was already a fan of her. In the late 1980s she used her popularity as a musician to launch a film career, and my favourite of her films is Desperately Seeking Susan. My favourite part of this film, the part which I watched with fascination the first time and many, many times afterwards, is when Susan dries her armpits on a hand dryer in a Port Authority public toilet.

I still don’t really know what my fascination with this was, but I think that a lot of it was so different from how women were portrayed in the films that I had watched before. In my film watching experience up to this point, women had been shown as fragrant, beautiful, good women who kept clean and looked pretty. Watching Madonna (dressed in clothes that I would have loved to wear, if only my mum and dad had let me) do something as skanky as drying her sweaty armpits on a hand dryer in public was transformative for me.

My second transformative female representation happened at a similar time on the BBC chart show Top of the Pops. In this particular episode, the Swedish singer-songwriter and rapper Neneh Cherry performed her song Buffalo Stance while visibly pregnant and flaunting her pregnant belly in trainers, a cropped bustier, short skater skirt and gold bomber jacket.

This was still a time when pregnant women didn’t really appear on television, let alone be so provocative in their dress. To me, she looked amazing. She was (to my young eyes) an older woman, who dressed youthfully, fizzed with energy and owning her pregnancy so publicly, performing the act of pregnancy in a playfully defiant way. My mum and dad were appalled, which I’m sure added to my own hero worship.

These representations in mainstream media were important for me as a girl who didn’t yet have access to more alternative forms. They helped me to realise that women can perform their identity in any way that they choose, and that it doesn’t have to be gentle, clean and ‘feminine’. For me, as a twelve year old, there was a glamour and defiance about both Madonna and Neneh Cherry that I wanted for myself. I’m pleased to say that even now, as a 40 year old with two daughters of my own, I feel free to dry my sweaty armpits on a hand dryer if I need to…although I always make sure that there’s nobody else in the room when I do it. I’m not quite as immune to society’s judgement of women as Madonna’s Susan is.

Who are your role models and what is it that draws you to them? Do they come from the worlds of music, film, television or celebrity culture?