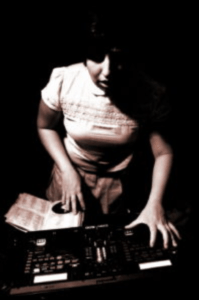 As part of our Alternative Girls exhibition, here are some extra interviews and reflections from women in the music industry. Read on for Sarah Raine’s perspective on female DJs.

When I am not working for Girl Museum, I am a researcher at Birmingham City University in the UK. My research considers northern soul, a music scene that started in England in the early 1970s, fuelled by young people who had a passion for what they named ‘rare soul.’ This music was created by African American musicians in the 1960s and arrived in the UK in the form of vinyl records in a time before CDs and electronic music files. It was very different to the popular music played on the radio and on television at the time and offered new experiences of listening and dancing, and access to a new and exciting place — America. Young people travelled across the country to attend events, to dance, and to hear DJs play these records.

The northern soul dance floors of the 1970s were filled with young men. Teenage girls and young women were not expected to stay out dancing all night, far from home. While some rebelled against these expectations, men largely held the important roles of DJ, event organiser and record seller. These soul fans are now in their fifties and sixties, but still organise and attend events in the UK and in other countries that have developed a northern soul fan base. Alongside this older generation are younger people who also enjoy listening and dancing to northern soul. These newcomers have sometimes been introduced to the scene by family members or friends, or have been inspired to attend an event by watching the most recent film, Northern Soul (Elaine Constantine: 2014). Like their male friends, young female soul fans want to dance, collect records and have the opportunity to DJ, but while younger male DJs are given a helping hand by the older generation of DJs, women are not offered the same opportunities and have to rely on a do-it-yourself attitude in order to be successful.

Take a look at a trailer for Northern Soul: The film to learn some more about this scene and to hear some of the music.

Northern soul is just one music scene that encourages people to collect and listen to music on records. Like northern soul, many of these scenes are interested in music from the 1960s and 70s. Mod culture developed in the early 1960s but it carries on today, playing R&B music recorded in the USA and the UK. Skinhead DJs also play soul, ska, rocksteady and early reggae records. As a researcher, I have spoken to young people who are part of these music scenes. Some of them have decided to share their record collection by DJing at event.

I have noticed that women especially find it difficult to be taken seriously. Most of the well-known DJs within these music scenes have been men, and both record collecting and DJing are generally seen as related to masculine interests. This means that people at these events expect a male DJ, and equally that boys will want to spend their time collecting records and learning to DJ. However, as we at Girl Museum have shown in our exhibitions, girls do not always do what they are expected to by others.

As part of their interest in music, some of the young women that I have spoken to have developed a record collection and started asking for opportunities to DJ. They have found that their experience is very different to young male DJs.

From the very beginning of their career, they are offered the worst slots (such as the very beginning and end of an event) and expected to share their time with another DJ. Faced with the sexist assumptions of event organisers, other DJs and even audience members, female DJs have to work against the expectation that they will be either using their husband’s/boyfriend’s/father’s record collection, or that their record selection will be basic. They feel the need to work harder than their male peers to ‘prove themselves.’ 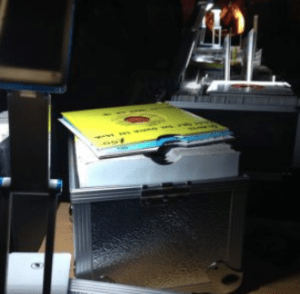 Records for sale at a northern soul event in the UK. Photo Credit: Sarah Raine.

Like the under-representation of women in other areas of music production and fan experiences, this is a very complex issue. The assumptions of society and the power held by men in in these music scenes often makes it more difficult for women to establish themselves as skilled and respected individuals.

However, the younger northern soulies, mods and skinheads are more supportive of female DJs and they don’t automatically assume that the DJ will be a man. For female hip-hop DJs, online communities such as Females wit’ Funk support and promote female DJs. As there are so few female DJs within the music scenes that I study, this level of organised support has not yet developed, but women are starting to help each other, offering advice on records, how to get a slot at an event, or how to develop an individual sound.

Stereotypical expectations of what women do and don’t do in their engagement with music is being increasingly tested by women and girls who want to collect records and DJ, and by other music fans who support them regardless of their gender. As a researcher, and as a member of Girl Museum, I aim to highlight the experiences of female DJs that are so often ignored or undervalued, and to give them a voice to express both their frustrations and their hopes for the future.