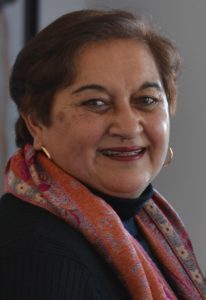 According to researchers Ntebaleng Chobokoane and Debbie Budlender, fifty percent of young people living in cities and towns in South Africa spend about 135 minutes per day listening to music or the radio. In another 24-hour diary study by Sharmla Rama and Linda Richter, a 13-year-old rural girl stated that she spent about 90 minutes per day listening to music or the radio. For this Girl Museum exhibition my students and I decided to talk to a group of twenty Grade 7 girls of mixed ethnic descent, aged between twelve and thirteen years, who similarly reported that they “loved” listening to music and dancing. These girls live on wine farms about 50 kilometres from the centre of Cape Town, where their parents are farm workers. They were part of two community groups, which provides girls with a safe space where they can talk about issues that they are concerned about. The groups, organised by two trainee psychologists and two students in psychology, met weekly during the 2016 academic year. These girls talked to us about what music they listened to, how they accessed and used the music, who their favourite artists were and why they liked these artists’ songs, demonstrating that music plays an important role in shaping young, South African girls’ understanding of themselves. 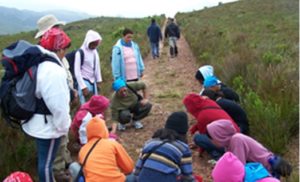 On one of our hikes with the girls. Photo courtesy of Sherine Van Wyk.

Image caption: On one of our hikes with the girls

The girls stated that they liked Kwaito (a South African genre of music), Hip Hop, R&B, Rap, and various songs by international pop stars. Their favourite pop artists that they talked about were Rihanna, Fifth Harmony, Beyoncé, Jennifer Lopez, Nicki Minaj, Ariana Grande and Eminem. Most of the girls downloaded their music from the internet, watched the music videos on YouTube, Channel O and they shared their music files with each other via their mobile phones and also on Facebook.

Listen to some Kwaito here. To understand the lyrics, click here.

When we asked who their favourite pop artists were, both groups of girls all shouted out Rihanna’s name and some of them started singing her song Work. They liked this song because girls in South Africa have so many chores at home and singing this song helps them to get through the chores. One of the girls said that the song also motivated her to not give up, but to work hard, “because if you stop working then life also stops.” Related to the idea of working, they also liked the song, Work from Home by Fifth Harmony. This song also appealed to them because they liked the dance moves, the clothes that the dancers wore in the video and the men’s muscular bodies. Jennifer Lopez’s song, I Ain’t Your Mama, was also a favourite among the girls because they thought that “men are lazy and women must do all the work at home.” The girls also wanted to talk about Jennifer Lopez’s appearance, and admired her “nice curly hair,” high heels and “that blue dress.”

When they started talking about Nicki Minaj and her dance videos, particularly Anaconda, the girls became very excited because they had different opinions about Nicki Minaj. Some of the girls identified with Minaj and admired her self-confidence. One girl said that Minaj does not “worry what other people say about her, because if you worry, then you’ll never develop self-confidence.” Some also liked her “big butt because men like girls with big butts.” However, others in the groups found Minaj’s music “disgusting because she reveals too much skin” and her music is just “too much.” These girls felt that artists who show “too much flesh, don’t respect themselves and their bodies” and that this “leaves nothing for men to wonder about.” 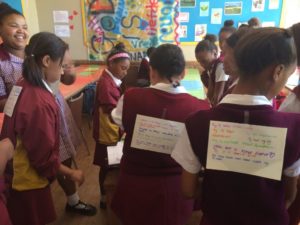 A picture from one of our group sessions. Photo courtesy of Sherine Van Wyk.

It is interesting that the girls mainly liked female artists and only referred to Lose Yourself by Eminem because his rise from poverty and that he previously lived in a caravan was something that they could understand through their own experiences. The girls that we spoke to based what they liked and disliked about popular music on their experience of living in South Africa.  South Africa is a society that is still dominated by men and where being a girl is about behaving like a ‘lady,’ looking respectable, being a ‘good girl’ and one day becoming a good mother and wife. What do you think about these artists and songs? How do your likes and dislikes relate to the culture and society that you live in?