As part of our Alternative Girls exhibition, here are some extra interviews and reflections from women in the music industry. This week, we’re speaking with Portuguese hip-hop artist, Capicua. Read on to hear her perspective of the music industry.

Junior Girl, Lauren P, interviewed Portuguese hip-hop artist Capicua (aka Ana Matos Fernandes) for Alternative Girls. Capicua’s music addresses sexism in the music industry and violence against women. Unlike many hip-hop artists in Portugal and around the world, Capicua raps in her first language rather than English, including regional slang in her work and exploring her identity as a Portuguese artist. Her song ‘Medusa’ tackles violence against women. Read on for an exclusive interview with Capicua! 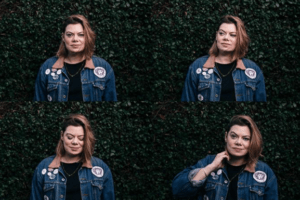 When did you know you were interested in music? How did you get your start in the field?

I started doing graffiti when I was 15 and that was my first contact with Hip Hop culture. I started to attend the parties that were in my city, where the “tribe” met and I started to listen to Rap (especially the bands of my city). My interest grew steadily, first as a listener to Rap and then as an apprentice to Rapper. At the end of 2004 I decided to make a band with some friends and became a militant rapper. Until today!

Why is rapping in Portuguese such an important part of your act?

I always liked words and the writing turned out very early as a vocation. And so when I discovered Rap, everything made sense and I ended up finding the perfect vehicle for my writing. With music, words go further and have more impact. But the origin of everything is the word, my taste and devotion for the word and especially for the word in Portuguese. I love the Portuguese language and am immensely grateful to have it as a raw material for creation! 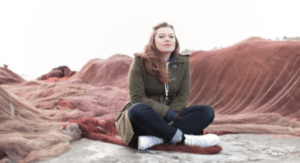 What challenges have you faced as a female in a male-dominated industry?

I think it’s very hard in the early years, because there is a mistrust. We have to prove that we are not there because we like Rappers, but because we like Rap. But in my case, after going through the years of affirmation and having proved that I had merit and dedication to Rap, the fact of being a woman ended up playing in my favor. Because as there are very few women in Rap, I ended up highlighting myself! This “exoticism” has always given me visibility and is always a good excuse to speak of feminism and patriarchy.

How do you deal with misogyny that exists in the rap world?

Proving that you can do it differently! Showing with my work and my attitude that I can get away with my Rap and that I do not need the approval of my peers for this! My achievements are just mine and that alone is a statement. Besides, I insist on always being spontaneous and proud of my work (two things that are not culturally stimulated in women).

I really enjoy listening to music in Portuguese. From Rap to Fado, to Brazilian popular music. But if you have to highlight my great influences I would say that they are: Amália, Laurin Hill, Erykah Badu, Sérgio Godinho, Chico Buarque, Caetano Veloso, Bob Marley and Dealema. 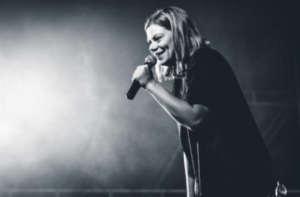 What message do you have for girls aspiring to be in music, particularly rap?

Be yourself and do the music you really want to do. It’s a lot of work, but it’s the only way we can have fun in the process. Living to fulfill someone else’s expectations is a prison. Lots of strength and good luck in the mission!