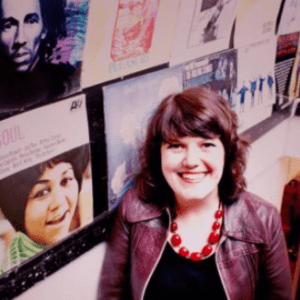 As part of our Alternative Girls exhibition, here are some extra interviews and reflections from women in the music industry. Read on to hear London-based radio presenter and podcast producer Ruth Barnes’ perspective of the music industry.

How did you get into the music industry?

I am a radio presenter by trade. I started a show called The Other Woman, which supports female artists and female fronted bands as a means to tackle the disparity in the industry, what I have heard on radio playlists, and seen on festival bills. This way I’ve been a supporter of independent artists and labels as many women artists operate in the indie sector. I’ve seen artists I’ve supported go from being bedroom singers to playing festival stages, which is highly satisfying! You can’t underestimate the importance of media supporting the independent music industry; we need more people doing it. It in turn leads to a thriving live music scene and more great new music which eventually influences the mainstream pop market.

What has been your greatest achievement so far?

Creating a platform for female artists and female fronted bands from all genres. A place where they feel supported and encouraged to reach their full potential. As a radio presenter, my greatest achievement is presenting programmes on BBC Radio 4, about women in music. Also reporting live from Glastonbury Festival 2010 on BBC Radio 5 Live and the BBC World Service at the same time; my biggest audience (millions!) by far!

What are your hopes for the future of the industry?

I hope that it diversifies further than simply male/female. We need to see many more kinds of people on stages around the country reflecting how diverse our population is. I’m not saying we need a complete end to well off white boys with guitars, but less of them would be much healthier! And the music press and journalists influence that. As more different kinds of people write about music, the more diverse the industry has to become.

Who within the music industry inspires you?

Without wanting to sound too cheesy, the artists I’ve supported. They are all artists who’ve battled with what it is the mainstream wants them to be and then have firmly pushed to do things their own way. Not an easy achievement when you’re often young and inexperienced. They are people who have trusted friends and family who support them no matter what, that’s hugely important too.