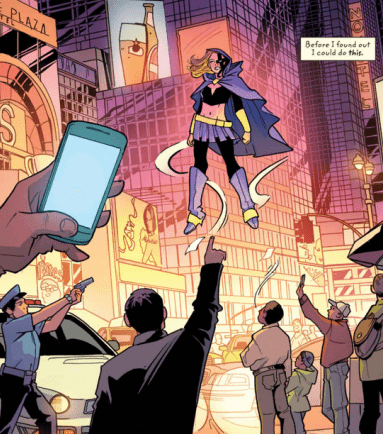 Chalice from the third page of Alters, written by Paul Jenkins and illustrated by Leila Leiz. Fair use rationale.

Alters is a comic first published in 2016, written by Paul Jenkins and illustrated by Leila Leiz. Set in modern day America, battles between good and evil are at an impasse. Additionally, Alters have begun appearing. No one knows if they are mutants or something else, but they are largely feared by humanity. With unpredictable, potentially dangerous powers, prejudice and mistrust are rampant.

One of these new Alters is Charlie. As she begins the process of transitioning from male to female, she also finds herself transforming into an Alter. Choosing to join the Gateway Army on the side of peace, she becomes Chalice. But in the midst of all these changes, she must find a way to tell her family about both her changes, and hope they’ll understand.

Though the cover of the first issue of Alters shows Chalice in her superhero costume, we don’t see more than glimpses of Charlie/Chalice until the third page. She is then revealed in her full glory (as the yet unnamed Chalice), hovering above the streets of New York.

Though one of the key plot points of Alters is the transsexual protagonist, at this point in the comics that hasn’t come out yet. While unlikely that a reader would be unaware of Charlie/Chalice’s transitioning, much of the marketing centered around Alters having a trans protagonist, the image does little to hint at that fact. Chalice’s midriff baring top shows off her strong, muscled body, and implies cleavage. The outfit as a whole has the feel of a “sexy superhero” that men would like to see. However, in light of the character, that sexiness can be used to distract from the clues showing Charlie is still in transition (she has just started estrogen therapy). Her jaw is a bit more square, and her abs a bit more chiseled than the average young woman. While there is nothing too telling, there are subtle signs if you look for them.

These signs are equally apparent where Charlie dresses as a male. His facial features are a bit more rounded than the average male, and he’s thinner, particularly in his limbs, than most men. And yet he’s drawn the same way. Like Clark Kent/Superman and his glasses, the only thing that changes about Charlie is our perception of her.