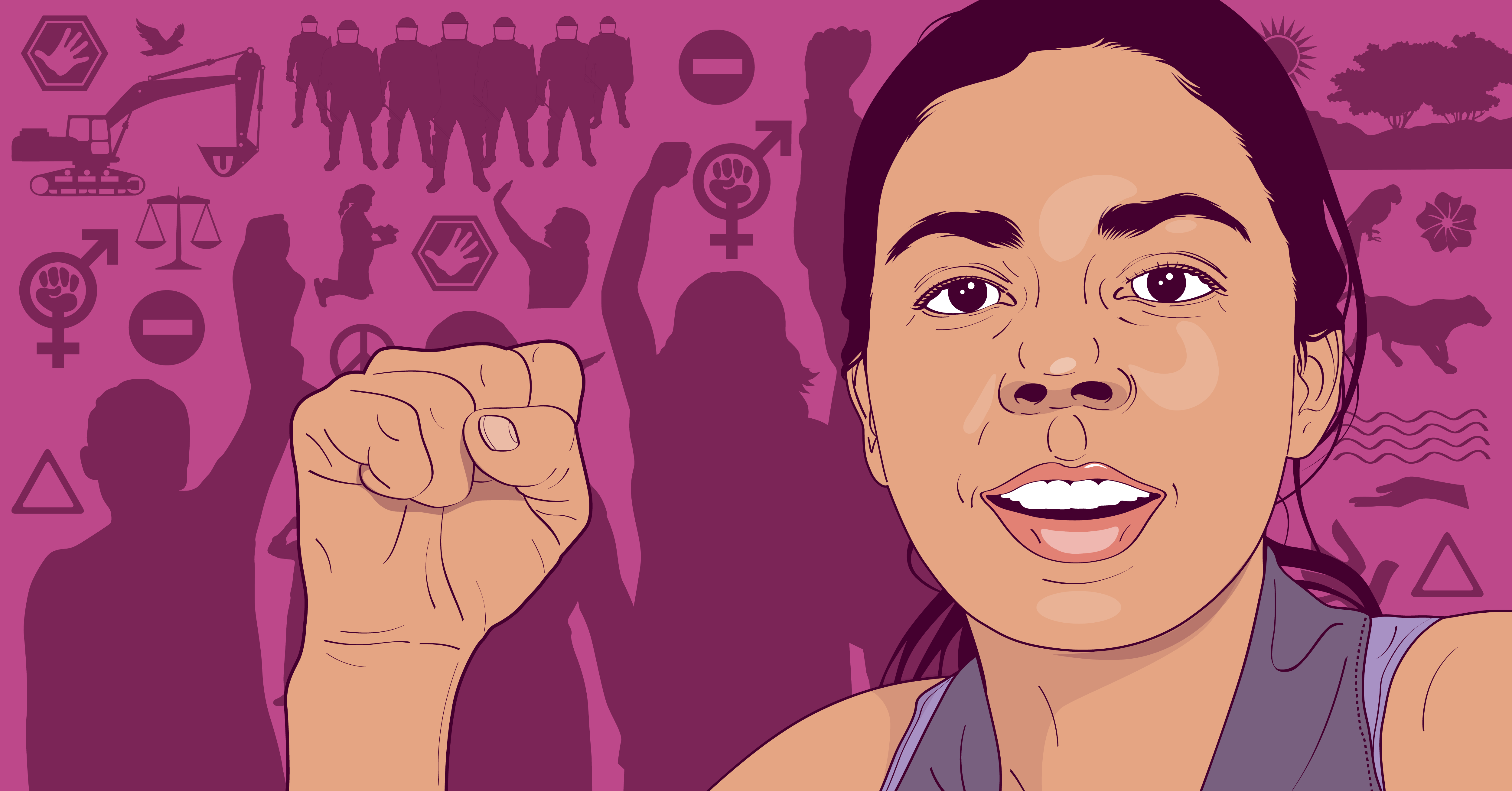 Can you imagine being in high school and discovering that a mining company is coming to destroy your home? That’s what happened to Ana Sandoval, a young land rights defender in Guatemala, who dared to stand up and protect her community.

As a teenager, Ana co-founded Communities in Peaceful Resistance, “La Puya,” an organization that defends indigenous land in Guatemala from US-based mining companies. When big corporations take land from indigenous people, like the land Ana and her family live on, these communities often face environmental and economic harm. So in 2012, knowing the kind of damage these big foreign companies can do, Ana decided to lead her community in protest. She began what became the longest-running protest of its kind. For four years, women, men, and children took shifts blocking the mine. In February of 2016, the Supreme Court of Justice in Guatemala issued a temporary injunction to suspend mining operations in Ana’s community Even with this victory, Ana and “La Puya“ will continue to fight until the government definitively stops all mining.

As part of the DefendHer campaign presented by Global Fund for Women, JASS, and MADRE, feminist visual artist Maria Maria Acha-Kutscher created a portrait of Ana Sandoval. Ana is one of the 14 women featured in DefendHer, a campaign that uses art to share the stories of women human rights defenders – women who fight for the rights of individuals of all genders – around the world.

Maria Maria’s portrait portrays Ana’s power and strength. Using layers of symbols, Maria Maria illustrates the success and struggles of each woman human rights defender, including Ana. Ana raises her fist in the air, as her community stands behind her. Maria Maria places images of animals and nature on the right side of the portrait to demonstrate the importance of Ana’s leadership in preserving the environment. Above Ana, she depicts children running and holding hands to signify hope for the future. Maria Maria’s use of the small mining symbol, peace signs, and doves show the peaceful nature of the protest. Ana unites her community with music, speech, and other forms of non-violent resistance. At the same time, the large images of police in riot gear and construction equipment portray the threat of the mining companies. Maria Maria shows the power that a girl, even still in high school, can have to fight for her community and her rights.

The DefendHer portrait of Ana is part of a movement that uses art to document the activism of girls around the world. Maria Maria says, “Artists are witnesses of their time.” Through her work, Maria Maria brings attention to the story of Ana, as well as to other female defenders, and inspires her audience to think more about the untold stories of successful women and girls.

From Ana’s story, we can see that girls of any age have the power to change the course of history. Ana reflects the sentiment of the movement when she says, “In the end, all the struggles have the same objective: the defense of life. That is the most important, no matter where we are or what the specific goal of each fight is.”

For more on Ana Sandoval and other women human rights defenders, please visit the DefendHer campaign.