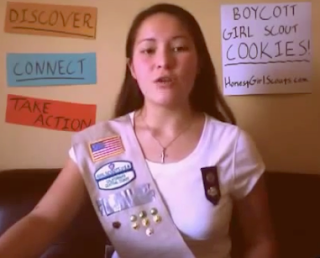 14 year-old Taylor in her YouTube video calling to boycott Girl Scout cookies
As we previously wrote, Bobby Montoya’s fight to join the Girl Scouts of America caused a national (and international) media storm. ¬†A transgender girl, Bobby was born male, but identifies in all aspects of life as female. ¬†Shortly after Bobby was initially told she would be unable to join a local troop, The Girl Scouts of Colorado released a statement through GLAAD (Gay & Lesbian Alliance Against Defamation) apologizing for the mistake and clarifying their policies.
Sadly, if not unsurprisingly, this has not been the end of the story. ¬†In Louisiana, three troop leaders dissolved their troops and resigned in December because Bobby was welcomed to the Girl Scouts, one of them stating that allowing transgender girls join created an “almost dangerous situation” for other troop members. ¬†Shortly thereafter, a 14 year-old California Girl Scout (initially identified only as Taylor) made a YouTube video urging a boycott of the popular Girl Scout cookies because she believes the Girl Scouts are using the proceeds to “[promote] the desires of a small handful of people.”
I am saddened that Bobby’s struggle to be accepted as the girl she is, regardless of her physical sexual attributes, is not close to over. ¬†Bobby will face struggles throughout her life, but I am truly saddened by the fact that a 14 year-old girl is further perpetuating the notion that Bobby is somehow perverted and “wrong” for the way she feels and acts. ¬†Alexandra Billings, a transwoman actress and singer, wrote “Fourteen-year-old Taylor is frightened for the Girl Scouts because she thinks a boy in a dress is coming to infiltrate what she considers to be very sacred female territory.” ¬†I understand what Alexandra is saying: we fear what is different, what we don’t understand. ¬†Alexandra goes on to write

Taylor is being taught very specific rules by very specific people, and the problem is that those are the only voices she’s hearing right now. This isn’t about why. I have no idea why I was born transgender. I could quote a bunch of facts and statistics, but so can anyone. All I know is what’s true for me. I realize my life can seem like a choice to some people. But if you stop and think, if I really had a choice, if someone actually gave me a choice for my life’s journey, I would have chosen one with much fewer obstacles.

And this is what terrifies me most of all. ¬†We are learn by what we hear, and if there are no questions, if we don’t ask why, we don’t move past the notion that Bobby Montoya is more than just a boy who likes to wear dresses.
You can read all of Alexandra Billings’ essay,¬†The Man of the House, here.
-Katie Weidmann
Junior Girl
Girl Museum Inc.
DONATE NOW