Being a Girl in an Anti-Woman Backlash: Organizing and Protesting 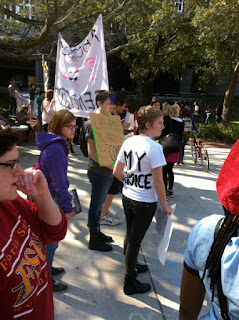 In the last few weeks, the anti-woman backlash has gotten newly energized and especially vicious and this re-emergence has become readily apparent on my college campus at Florida State University.¬†Whether it is large-scale anti-choice demonstrations, fierce attacks on our feminist community by the College Republicans, or the sheer knowledge of the legislative backlash that is being considered this session, the anti-woman sentiments of our current political status quo are inescapable.
About a week ago, my campus was invaded by the Genocide Awareness Project, an anti-choice demonstration that includes giant scale, illegally obtained, and mislabeled photographs of late-term aborted fetuses along side of photographs of the mangled bodies of victims of historical genocides like the Holocaust and the killings in Rwanda. This comparison offends many more than pro-choice advocates.¬† The GAP operates in secrecy so as to avoid students organizing a demonstration to challenge theirs.
However, my local Planned Parenthood gave me and my feminist RSO, The F-Word, a heads-up about their impending arrival.¬† We had about a week to organize a counter-demonstration.¬† We immediately began creating an organized team of protesters, utilizing Facebook to access rogue feminists and pro-choice people on campus, and to let them know information they would need to be involved in our protest.¬† We compromised on demonstration tactics with other organizations and individuals within the movement in order to create some solidarity of pro-choice presence. 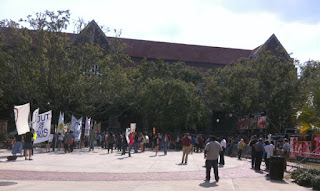 This proved to be the most difficult part of organizing for this counter-protest.¬† In the end we had signs large enough to rival the two-story scale photographs the opposition were displaying, more message-oriented small signs, and a fact-sheet that described why the GAP display’s images and comparisons were inaccurate and offensive to genocide survivors and people related to them.¬†By the day that the GAP’s presence arrived, The F-Word and I were already exhausted from conflict.
We arrived at about 9:30 am at our Union Green, where the display was already set up and staffed with volunteers.¬† Their volunteers stand behind a protective metal fence surrounding the display.¬† Our counter-demonstration started small and grew rapidly, peaking at about 200 people. On the second day of the demonstration, the GAP got a permit to use amplified sound, which they used for a Q & A in order to espouse their arguments.¬† Individuals within our counter-demonstration started chants like ‚ÄòMy body, my choice‚Äô, and ‚ÄòKeep it legal, keep it safe‚Äô. Our collective voices drowned out their single electronically amplified one.
Being girls and feminists, and many of us queer girls, in the middle of this fervent debate made us uniquely aware of how the opposition felt about us.¬† Many of us gave in to the temptation to engage in arguments with anti-choice supporters and were disappointed to have our arguments dismissed with judgmental statements like, “Go shave your armpits.”¬† One young man on the anti-choice side of the argument brought a hand made sign that read, ‚ÄòIf you don’t want a baby coming out, don’t have guys coming in‚Äô. The rampant slut-shaming and objectification of women was difficult to take silently.¬† Some screaming matches ended up erupting, and some individuals chose to deal with the opposition by yelling maniacal statements at passers-by, but overall the pro-choice demonstration kept it’s cool and acted the more sane party. 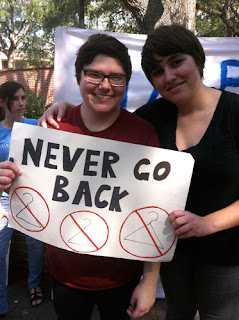 In the end, the pro-choice counter demonstration was a huge success; the F Word got 1500 signatures stating that they did not welcome GAP’s presence on their campus, and many new members.¬† The pro-choice solidarity was incredible.¬† People of all genders, races, political affiliations, ages, religions, and backgrounds came together to demonstrate their passion for a woman’s right to choose.¬† The diversity of the pro-choice presence, the fervent energy the presence generated, and the sense of unity within our counter-demonstration gave us a resonant feeling of hope that is sustaining many of us through this anti-woman backlash.
-Kaitlin Froom
Junior Girl
Girl Museum Inc.
**Message from the Head Girl
Check out the No Abortion/Genocide Awareness Project website to see the manipulation of imagery, history and context for yourself.To read about the actual Genocide Awareness Project, check out their blog.
DONATE NOW