Beyond Three Cups of Tea… 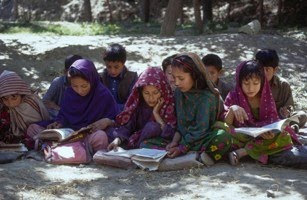 Photo: Central Asia Institute
In the latest press release by the US State Department, Advancing the Rights of Women and Girls: Keys to a Better Future for Afghanistan, the obvious is revealed. The notion that men and women need to work together to build a better country reads like it is something revolutionary and it applies to the entire world, not just Afghanistan. Although well intentioned, the new Women’s Action Plan for Afghanistan is filled with fantastical hopes.
It seems they have finally read their stocking stuffer copy of Three Cups of Tea. This book tells of Greg Mortenson’s amazing story about being saved by villagers after a failed attempt to climb K2 and being shown gracious kindness in the most inhospitable of places. Deeply moved by the lack of educational resources, especially for girls, Mortenson has dedicated his life to the mission of bettering their lives through building schools, in the mountains and other remote regions of Afghanistan and Pakistan.
To date, his organization, Central Asia Institute has built over 130 schools. Ironically in the two countries the United States is now engaged in warfare. Mortenson promotes peace his way; the US government has promotes something else, their way. While he has become an unofficial advisor to the top US military generals in the region, the government (and public) in general seems to lag behind in their want to understand what is really happening.
As the State Department claims, “there is much to be done,” which is more than an absurd understatement. Yet it seems that one man in a kaftan has had a more positive impact than 70,000 in fatigues.Watch Greg Mortenson on Bill Moyers Journal.
DONATE NOW