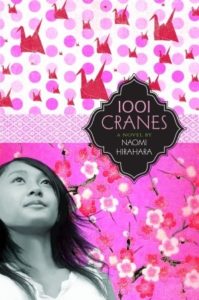 I wasn’t quite sure what to expect when I picked up 1001 Cranes by Naomi Hirahara. I thought it wouldn’t be a book that I would necessarily be interested in, and I have absolutely no idea why because I practically flew through the YA book. I couldn’t stop reading, and hopefully some of my enthusiasm rubs off on you; you should read this book too and here’s why.

1. A fierce, funny, flawed, perceptive narrator and protagonist: 12-year-old Angela Kato is a delight. Sent to live with her grandparents in Los Angeles for the summer, she knows that there is something her parents aren’t telling her, and that there is a reason she is being made to leave her home in San Francisco for the entire summer.

2. Cultural heritage: my relatives came to the United States from Norway, France and the Netherlands generations ago, so I’m very removed from that particular cultural heritage; Angela is the exact opposite. Her parents are very American, and the only exposure to Japanese culture she’s gotten before the book starts is yearly visits to her maternal grandparents, and her parents telling her “no monku,” or don’t complain. When she moves in with her grandparents for the summer, she’s suddenly immersed in Japanese culture — she’s learning how to fold origami cranes for weddings and anniversaries, she’s going to Sunday school youth groups with other Japanese-American kids and she’s eating rice with every single meal, something that she has trouble adjusting to.

3. Family relationships: Now, some of the relationships in this book made me want to scream (at the adults, not at Angela). Throughout the book, there is a constant theme, if you will, of adults withholding information from Angela about her life and her own family. She’s a very perceptive kid, so she picks up on this immediately and starts to question why certain things are happening or not happening. The relationships between Angela, her parents, her grandparents and her aunt are very fraught with tension and things left unsaid, but I think that’s what really elevated the book for me. I enjoy diving into those messy family relationships and finding out what makes a person tick.

4. Traditions: One of my favorite things about the book was delving into all of the family traditions, quirks and expectations, not only in Angela’s family but in the next door neighbor, Mrs. Osaka’s, family as well. The emphasis on evolving family traditions was a really fascinating part of the book. Every couple of chapters, there would be an excerpt from Grandma Michi’s handwritten book of best folding and origami practices. I’m not the best at crafts, so I definitely understood and empathized with Angela’s struggle to learn — under her stern grandma’s exacting gaze — how to properly fold a paper crane.

Overall, I thought this book was great. The writing was almost lyrical at times, and I loved seeing Angela’s progression as a character and her evolving relationship with her mother, grandparents and neighborhood friends. When she first arrived in LA, she was struggling with coming to terms with her parents’ crumbling relationship but throughout the book, folding paper cranes and working in her grandparents’ flower shop became a coping mechanism for her and she was better able to deal with the turmoil in her life. I really loved that part. Angela is an awesome girl protagonist and I’m glad I read this book.