Book Review: A Murder for Her Majesty 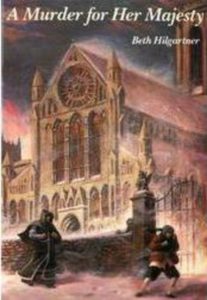 This is the cover I grew up with. My new copy has a different cover and it was very weird at first! Photo: Scholastic Website

A Murder for Her Majesty by Beth Hilgartner used to be one of my favorite books in 5th grade (age 10-11) and I read and reread it constantly. All I remember about that elementary school library copy now is that it was a big, dark hardcover and it had a girl in front of a cathedral and a shadowy figure on the cover. But I was just obsessed. I’ve always been a sucker for historical fiction, and I think this book definitely only fed my obsession with the genre.

Fast forward 5 years later in my mid-to-late teens, and something in me was just dying to read that book again. Problem was that I had absolutely no memory of the title or author, but very vivid memories of the plot and the dark, shadowy cover. Racking my brain and coming up with nothing, I decided to turn to my best friend, Google. Within minutes of typing in “Alice Tuckfield, York, Queen Elizabeth I, Murder,” I finally found what I was looking for, and promptly added a copy to my ever-growing Amazon cart. I usually add tons of stuff to my Amazon cart in case I might want to buy it one day (and then never do) but in this case, I bought a paperback copy, and only that book, which is a minor miracle in and of itself because I am weak when it comes to books! I want them all. But I digress.

A Murder for Her Majesty by Beth Hilgartner was written in 1987 and it makes me chuckle every time I read the acknowledgements because she thanks someone for the use of their computer. Meanwhile, decades later, I’m sitting over here literally writing this review on the notes section of my phone, which is a computer that fits in the palm of my hand. Technology is a bit scary but awesome. Moving on…

The book opens up with 12-year-old Alice Tuckfield winding through the cold and damp streets of York, in the Elizabethan era. Prior to her journey to York, she was with her father, renowned musician Sir Henry Tuckfield, at their country home, and had escaped from her governess and hidden in a tree where she witnessed her father’s murder. She heard the murderers talk about her and mention that “the Queen would be pleased.” Alice decided that moment to set off for York and go to a friend of her father’s — he had made her promise some years back that if anything happened to him, she would seek out Lady Jenny at Chellisford Hall.

She’s cold, hungry, tired and looking to get to Chellisford Hall, which she finds out is 8 miles outside of York — a crushing disappointment when she’s already been traveling on foot with no food for days. She’s in York, trying to find the cathedral and not taking into account all the houses and buildings that block the view, when all of a sudden she gets knocked to the ground.

Alice essentially gets adopted by the boys who accidentally knocked her to the ground. The boys are choir boys at the cathedral and they decided it would be a lark to chop off Alice’s hair, start calling her “Pup” for a nickname, or Alister Tucker, and have her join the choir. They think no one will find out and Alice was especially relieved to have a safe place to stay, for now at least.

Alice is one of my favorite childhood characters. She is scrappy, fearless at times, quick on her feet and very caring and compassionate.

I don’t want to risk giving away too much of the plot, but suffice it to say, Alice has quite the adventure as a choir boy, and makes lifelong friends while trying to uncover the plot of her father’s murder. It’s a fantastic book, Alice is a great character and I’d highly recommend it to just about anyone! Happy reading!