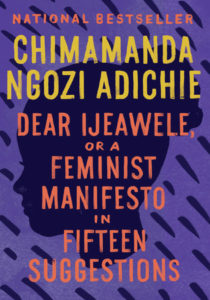 Dear Ijeawele is a guide to feminism written as a letter from the author, Chimamanda Ngozi Adichie, to her friend. Ijeawele asked Chimamanda how to bring up her daughter as a feminist, and this book is her response.

In it, the author lists fifteen suggestions. Some of these are simple (such as not treating marriage as an achievement in itself, or not saying her daughter cannot do something because she is a girl) and some are more complex, such as suggestion eight, to ‘Teach her to reject likability.’ Whilst many may seem difficult, I feel that Adichie sums up the best response to the task put forward in her introduction to the book: “My friend sent me a reply saying she would ‘try’ to follow my suggestions. And in rereading these as a mother, I too am determined to try.”

Dear Ijeawele was the first of Adichie’s non-fiction I had read. Although it is a very small book, its mix of humour, wit and honesty made it stick in my mind for a long time after I had finished it. Separating the advice into fifteen suggestions made the book’s structure very clear and her suggestions fit into a simple format. Adichie was also able to cover many diverse topics, from choosing a helicopter and a doll to play with, to having careers not hampered by anyone else’s expectations.

I first came across Chimamanda Ngozi Adichie’s writing when I read her novel Purple Hibiscus. This novel follows a young girl living in Biafra-era Nigeria. I loved that a young female voice was so central to the plot. I then read more of her novels (such as Half of a Yellow Sun and Americanah) all featuring strong, independent, African women who could tell their own stories.

In Persuasion by Jane Austen, Anne Elliot states “Men have had every advantage of us in telling their own story … the pen has been in their hands.” Adichie’s works see her taking back that pen and writing both fiction and non-fiction which is changing the landscape of literature. Dear Ijeawele in particular really struck me, as the work is essentially a friend offering advice to a friend — and yet it somehow also addresses the issues and thoughts of women and girls across the world. I see ways in which I can help and educate myself and those around me in its suggestions. As Adichie says, I am determined to at least try.

As this book is written as advice for a young girl growing up into feminism, I would recommend this to teenage girls onwards, as the style of language and content would probably make sense to slightly older readers. I would highly recommend her works of fiction to older teenage girls as well.

As well as her fiction books, Chimamanda Ngozi Adichie has also written another non-fiction book; We Should All Be Feminists.