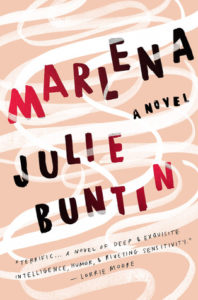 I read Marlena by Julie Buntin with my book club. The organiser of the book club has an incredible taste in books so I expected to like it, but I actually loved it. Marlena is a story of friendship between two young girls, and is a wholly addictive tale of how adolescent friendships shape our adult personalities – for better or worse.

The story is told retrospectively by the 30-year-old narrator, Cat, depicting the year she moved to Michigan and fell into an intoxicating friendship with her neighbour, Marlena. Marlena, a few years older at 17, introduced Cat to drugs and boys. I’ve read a couple of reviews that go as far as to say that this is a book about addiction. Drugs are frequently mentioned, as is Marlena’s undeniable addiction. Key points in the plot happen under the influence of drugs for both Cat and Marlena, with Marlena’s father making meth in the trailer just outside Cat’s home. While this makes the life of Marlena all the more tragic, and perhaps lends itself the ultimately inevitable end of the friendship, for me the book is always about that bond of camaraderie between the girls.

A comparison has been made to The Girls by Emma Cline. While the books are completely different in their narrative, I do see the similarities. Both books hold at the centre that addictive bond in a coming-of-age friendship. Despite being told by the narrator’s 30-year-old self, she captures adolescence impeccably. Her constant references to Joni Mitchell and Stevie Nicks, lipgloss and tee shirts are a reminder of how young Cat was at this point, of course a tragic paradox to her slipping into the dangers of alcohol and drug addiction herself.

It is no spoiler that Marlena dies; it’s stated on the sixth page. Marlena drowned in “less than six inches of ice-splintered river, in the woods on the outskirts of downtown Kewaunee, a place she had no reason to be at twilight in November.” While Julie Buntin has confirmed that this isn’t an autobiographical book, it does mirror her own life. She writes for the Atlantic a poignant article about an equally infatuated adolescent friendship, in which she “was in love with her in a not-entirely platonic way, which every woman who has been the sidekick in a teenage girl-duo will completely understand.” Her friend, Lea, also passed away young. This friendship-cut-short dynamic that is the overarching theme of Marlena is from personal experience, and this is increasingly apparent in reading the book as it is reflected upon so beautifully.

Marlena is a story of addiction, poverty, troubled family, and a life cut short. However, what Marlena is ultimately about is adolescent friendship and how those friendships shape our lives. While adult Cat has a successful job in New York, a loving boyfriend and a slowly improving relationship with her family and her own addictions, she can still never forget the significantly influential teenage friendship with Marlena.