Book Review: There’s Someone inside Your House 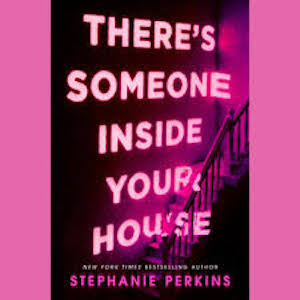 There’s Someone inside Your House by Stephanie Perkins follows high school student Makani Young as she settles into her new life in Nebraska. She moved from Hawaii under mysterious circumstances, but quickly makes friends and, as with many YA books, finds romance. Her life is nice and normal until the students at her high school start getting murdered in increasingly violent ways.

This book was described as ‘Scream meets YA,’ which is why I bought it. Scream is my favourite movie (I can quote it backwards and forwards). Perhaps this is why I was a little bit disappointed in it. The book did not frighten me the way I thought it would. The descriptions of the murders were quite graphic but that is not the same as horror. For me the most interesting part of the book is Makani’s back story.

Makani moves from Hawaii to live with her grandmother and we are told she has very little contact with her parents. She doesn’t divulge to her friends or her boyfriend why she left, but at the end of the book we finally learn the truth. SPOILER ALERT We learn that she and other new members of the school swim team were the victims of hazing. During this hazing she turned on one of her best friends at the behest of other team members. The case ended up being quite high profile, and unable to cope with the media scrutiny, she moved to be with her grandmother. Hazing, peer pressure, and bullying are all major issues affecting teenagers around the world, and it would have been nice if more time was spent on this part of her life.

For me it felt like two separate books pushed together. The mystery of who is committing the murders is resolved earlier than I thought it would be, with the second mystery of what happened in Hawaii being revealed at the end. Overall, however, I think this is a fun, quick read that is not too scary!