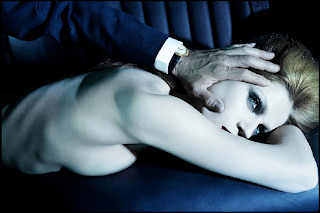 Minuit — Paradis — 2007 — Miles Aldridge
www.milesaldridge.com
There are two movies I‚Äôve seen recently and enjoyed, despite their very different plotlines. ¬†For Colored Girls is a dramatization of series of poems by Ntozake Shange that depict the lives of black American women. ¬†Vanishing on Seventh Street is a thriller about five people who survive a mysterious apocalypse. ¬†So what do these movies have in common? ¬†They both star the talented actress Thandie Newton, who was also featured in Crash as a woman assaulted by a white police officer.
Thandie Newton has been in the news in the past few days after talking about having an affair with a director when she was 16. ¬†In an interview with InStyle magazine, Newton said that while making the British film Flirting, she began a relationship with the movie‚Äôs writer and director, who was 23 years older than her. ¬†She says she doesn‚Äôt consider herself a victim, but also admits she felt coerced and ultimately entered therapy.
It should be noted that in the UK, where this relationship took place, Newton was above the age of consent, which is 16. ¬†I‚Äôd also like to point out that not every relationship with a significant age gap is inherently unhealthy. ¬†But I think in this case, it‚Äôs pretty clear that this director was able to take advantage of a young, inexperienced girl who suffered from the consequences. ¬†In most workplaces, this would be considered sexual exploitation. ¬†Being a creative, artsy type does not excuse an older man from being a predator.
Of course this practice is nothing new ‚Äì in fact, the notion that directors and movie producers expect women to sleep with them in exchange for roles has long been termed ‚Äúthe casting couch,‚Äù and there are many examples in film history. ¬†In 1955, the 16-year-old actress Natalie Wood began an affair with 44-year-old Nicholas Ray, her director in Rebel Without a Cause. ¬†The actresses Gwyneth Paltrow and Megan Fox have both reported being asked for sexual favors from potential directors at the starts if their careers. ¬† Perhaps most famous is Roman Polanski, and his still-ongoing sexual abuse case of¬†Samantha Geimer. ¬†But just because this practice has become ingrained in Hollywood culture doesn‚Äôt mean we should look the other way, or chalk it up to ‚Äúcreative genius.‚Äù ¬†Instead, we should encourage girls to use their talents to pursue their ambitions, and not give license to men to take advantage of younger women.
-Miriam Musco
Junior Girl
Girl Museum Inc.
DONATE NOW