Chess is for Girls 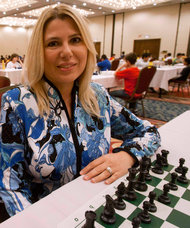 Bonnie Trafelet for Chicago News Cooperative
Chess grandmaster Susan Polgar
Every year for the past I don‚Äôt even know how many years, it has been my New Year‚Äôs resolution to learn to play chess. As you may have discerned from the frequency at which it features at the top of my self-improvement list, chess is still not a talent which I can lay any claim to. Heck, not even any basic knowledge. I am officially a duffer.*¬†But unlike me, hopefully many other girls will be inspired to tackle the monochromatic board after a presentation to Chicago elementary school pupils by Chess Grand Master Susan Polgar.
Born and raised in Hungary, Polgar has been playing chess since she was in diapers. At age 4 she earned her first victory, taking out the 11 and under category at the Budapest city championships while seated on a stack of phone books and pillows so she could reach across the board. Her passion for the game has continued, and now 38 years after that first win she holds the title of Chess Grand Master ‚Äì the first woman to do so.
Polgar‚Äôs involvement with the sport of chess extends beyond crushing opponents; she is also focused on inspiring and supporting girls in the field. This desire stems from the treatment she experienced first hand while competing at all levels of the game. She says of her early days in the sport, ‚ÄúIt was very much ingrained that women were not able to play. A lot of experts and elite players believed that we were not physically able to do it, our brain was not big enough or that we couldn‚Äôt keep quiet long enough.‚Äù She believes that this line of thinking and the lack of support that comes with it are the reasons why most girls drop out of competitive chess by fourth or fifth grade. Through the Susan Polgar Foundation and the Susan Polgar Institute for Chess Excellence at Texas Tech University, Polgar aims to change this. The foundation sponsors chess events throughout the United States and offers chess scholarships to the Texas Tech University for students who excel in college tournaments.
But Polgar has even bigger plans for the sport. Her belief in its ability to assist in the study of maths and science, as well as the more general skills of discipline, analytical thinking, focus, patience, and time management inspires her dream ‚Äúto get in front of education decision makers and convince them to make chess part of the curriculum for K through second grade. That‚Äôs when thinking patterns and habits are formed. It should be mandatory, like physical education.‚Äù
Whether or not Polgar‚Äôs dream is realised remains to be seen. ¬†But if it is it would be a check(mate!) in the box of alternative thinking for improving maths and science performance for girls.
*Duffer: Chess slang term for a very poor player. Also called woodpusher, patzer.
-Briar Barry
Junior Girl
Girl Museum Inc.
DONATE NOW