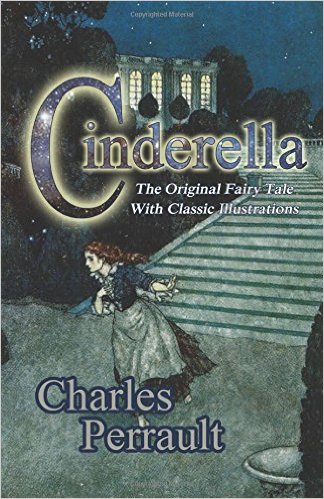 A cover from Charles Perrault’s version of Cinderella.

When people say the name “Cinderella‚” many jump to the 1950’s Disney version of the story. Or perhaps, you think of Disney’s 2015 reimagining. However, few know that the origins of the folktale date to the 1st century BCE, with its current format being attributed to French author Charles Perrault and his 1697-98, book Cendrillon. This story, like many others, was then retold by the Grimm Brothers in their folktale collection of Grimm’s Fairy Tales, first published in 1812.

Cendrillon tells of a stepmother who enlists her husband’s daughter in the worst of the housework, purely because the girl’s beauty made her stepmother’s two daughters look plain in comparison. When the girl finished her work, she would sit amongst the cinders. This led to the nickname “Cinderwench” from her stepmother and her eldest stepsister. The younger sister wasn’t quite as bad, and called the girl “Cinderella” instead. On the first day of the prince’s ball, a fairy godmother appeared and fashioned Cinderella clothes that were gold and silver. As per the fairy’s rules, Cinderella left the ball at 11.45pm and was home before the magic disappeared. However, on the next evening she lost track of time with the prince, and lost her slipper in her rush out of the door at midnight. The Prince declared that he would marry whoever the shoe fitted and sent his men in search of his love. When it reached Cinderella, she bantered with her sister and the guards who were so astounded by her beauty that they let her try it on. The slipper fit, and the prince and Cinderella lived happily ever after.

The popular Aarne-Thompson categorisation used in relation to folklore paints Cinderella as a “persecuted heroine.” This description relates to a character who has been abused by a stepmother or stepsisters. They then experience an intervention by the spirit of her dead mother, a supernatural being, or an animal, who provides her with beautiful clothing. She then meets a prince, who attempts to keep her and is eventually reunited with him by a “slipper test.” This categorisation can then be used to connect Cinderella with the 1st century BCE tale of Rhodopis, a Greek slave girl.

The tale of Rhodopis comes to us from the Greek geographer Strabo, who retold the story in the year 1 CE. She was a beautiful slave girl from ancient Greece who was bathing in Naucratis when an eagle stole one of her shoes, which had been given to her by her previous owner. While the Pharaoh Amasis was dispensing his justice in the open air of Memphis, the eagle dropped Rhodopis’s red slipper in his lap. The king was so intrigued he sent his men across Egypt in search for the woman who owned the beautiful shoe. She was found and taken to the Pharaoh, who thought her to be so beautiful that he fell in love with her immediately and made her his queen. The later aspect of the step family is taken up by her slavers in this early tale, and the story arguably has remarkable similarities with the story of Cinderella.

Overall, the folktale of Cinderella has been constantly reimagined over thousands of years. As with many other fairy tales, I am confident her legend will exist for many more.