Although the details widely differ in the several versions of Cloelia’s legend, the core narrative about this heroic girl remains consistent. In the 6th c. BCE, Cloelia was part of a group of hostages given by Rome to the Etruscan king Lars Porsena. The group of ten young noblemen and ten maidens was intended to secure a peace treaty. Girls and women throughout history have been used as collateral to secure political and social alliances.

While bathing, Cloelia led the noble girls in an escape from their fate, swimming across the Tiber River, despite the rain of enemy spears. Unfortunately, the deal was more important than the security of his daughter, so her father returned all the hostages until the treaty was finalized.

Upon her return, Porsena stated that he admired Cloelia’s bravery. He gave her a horse and granted her freedom along with some of the other hostages. She chose to free the other children because they were the most at risk of ill-treatment.

This painting by Cozzarelli depicts the scene of Cloelia and other girls on their daring swim.

On the left, we see the group of hostages being given to King Porsena. In this section, it is notable that one figure appears in darker dress than the others. Perhaps this is Cloelia, intended to be emphasized since she is the heroine.

On the right and middle portions, Cloelia and her companions are shown during their escape across the Tiber River. One girl seems to be sneaking into the river, while the foremost girl looks back, perhaps in fear. The two others girls seem more frantic, hastily swimming to Roman shores. Cloelia escapes through the gates of Rome, still in dark dress. She turns back, as if to make sure her companions are following her. The jumbled mass of buildings behind the gates signifies the enormity of Rome, with Cloelia a dark figure disappearing into it.

One item of note is the figure directly to the left of the gates, clad in red and gold. This girl appears pregnant, perhaps the artist’s subtle nod to the reality of being traded into slavery.

The Legend of Cloelia was painted on the front of a chest, called a “cassone.” Cassone were created to celebrate marriages or as commissions for wealthy bankers and merchants in Italy. In the cassone, the family would place its most valued possessions. The panels of cassoni featured narratives and the family’s coat of arms or insignia. Popular narratives came from the works of Homer, Virgil, Ovid, and — as is the case here — Plutarch.

Such panels often ignored historical accuracy, favoring to depict their subjects in popular dress of the Italian Renaissance. In The Legend of Cloelia, this is also true, since the style of dress depicted is Renaissance rather than Ancient Roman. It was a way of relating the narrative to the present day.

There was another purpose for cassoni. They might have been utilized as proto-comic strips. In The Legend of Cloelia, we read the entire story in one panel. Children of the married couple for whom this was made might have spent hours spelling their way through the legend, learning about Cloelia and her bravery. 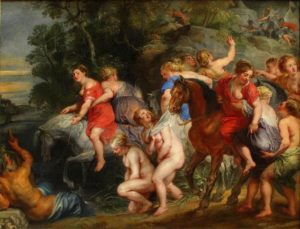 Another work depicting Cloelia’s story is the painting by Peter Paul Rubens, seen above. Cloelia is depicted here on horseback leading the girls towards the Tiber. Having seized the opportunity to flee as they bathe, the girls are naked, exposed and vulnerable. Their nudity or partial nudity serves to emphasize their vulnerability and haste. Above them, Porsena’s soldiers appear on the cliffs above them, spears at the ready. We can see that the girls are fearful — one in the background holds up her hand, perhaps motioning them to stop throwing their spears. Others seem to pay the soldiers no mind, hastening into the river or on horseback as they escape. In the left hand corner, the god of the Tiber reclines, holding his characteristic oar and ushering the girls into his realm where he will protect them.

In Rubens’ painting, we see more historical accuracy. The girls wear loosely draped clothing, and the soldiers can be seen in traditional Roman dress. Rubens uses a lot of movement and color, two components of his Baroque style that lend a very active portrayal of Cloelia’s story. We can see the emotion in her and her companions, feeling the rush and grasping for freedom.

Notably, the figures in the painting are also very sensual (despite being quite young), possibly a result of Rubens’ marriage to his first wife’s 16-year-old niece in 1630. In many paintings during the last decade of his life, Rubens used his young wife as a model for his voluptuous subjects — so much that she was even recognized by his viewers. His fondness of painting full-figured women would eventually be called the “Rubenesque” style.

What all this meant for Cloelia was that her story — and her youth — were forgotten by Rubens. In his version, she is a fully grown woman, rather than the young girl fearing for her life.