Confessions of an ex (and involuntary) tomboy 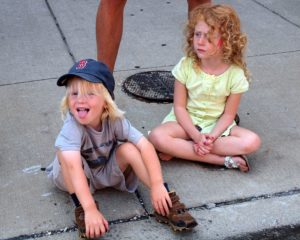 A tomboy and a “girly” girl on a sidewalk. Photo Credit: TheeErin. CC BY-SA 2.0.

I was a “tomboy” for my entire childhood. I made the decision from a very young age to wear my hair very short, for many years, to look more like my dad. Among some of my dreams were to become one of the ninja turtles and Mario Bros. Yet, never did I ever identify as a boy or dreamed about wanting to become one. I remember getting very offended when people would mistake me as one. Despite the hurt, I did not hesitate to stand up for myself as I screamed loud and proud that I was in fact a little girl. I remember them reacting by apologising but also laughing which certainly did not make it better for me. Despite how good their intentions were, I remember thinking: ‘How rude of them to assume without asking me first but even worse, laugh when I tell them who I am!’ Already at that age, I was aware that something wasn’t right but I’ve never been quite able to put my finger on it.

Appearing in the middle of the 16th century, the term tomboy was originally used to refer to a ‘rude and boisterous’ boy — the kind of boy that loves to cause some sort of chaos. The addition of the prefix tom is said to come from the name Thomas. Not only the name was very common but it would often be used as a substitute for the word boy. By use of a repetition, tomboy becomes more than a simple allusion for a ‘boy.’ It becomes a concept that encompasses the idea of boyness. But the term experienced a radical shift a few decades later to refer to a ‘girl who acts like a spirited boy.’

If the reason of this shift is still not very clear, the meaning did not change since. Now a part of popular culture and even everyday life, the term is used to refer to girls that have characteristics, and take part in activities, that are perceived as ‘boyish.’ This goes from having short hair to liking rougher sports and from a preference for trousers to a tendency for defiance.

Through this categorization, the term reinforces the gender divide. It also stigmatises girls by invalidating them if they are not conforming to society’s standards. But it also shames them for simply daring being themselves.

While the term is often thrown innocently, I believe it actually constitutes an act of violence. It gives the impression that identity, which is very personal, is up for other people to decide. What makes it more problematic is the concept of rudeness that is associated to the term that we saw was originally part of the term, as if not fitting society’s standards is bad-mannered.

While things are changing and some department stores are even discussing the benefits of promoting gender neutral clothes, gender stereotypes still remain very much anchored. A study last year published in the journal Science revealed that already from the age of 6, kids were aware of and picked up on gender differences. One of the most frightening results that came out was the fact that girls thought themselves as less intelligent. In fact, they would associate intelligence with a male characteristic. Keeping this in mind, the term tomboy almost works as mockery by reminding girls that despite being compared to a boy, they will never be close to one.

In a world where discussions on how gender identity does not necessarily have to define ‘who we are’ are increasingly omnipresent, the tomboy term appears very outdated. This is why it is not only time to give up on it, but also, time to show girls that there is more than one way to be a girl. So let’s finally celebrate girls for who they are!