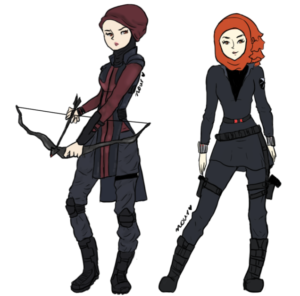 This is the final blog post in this special series on some of the amazing female graphic artists and their awesome warrior women creations. Whilst our previous two artists have firmly established themselves within the comic book industry, Nour Saleh is a young and up-and-coming graphic artist whose work sped across the world via social media.

Check out our previous posts on Annie Wu and Fiona Staples¬†for more!

Living in Canada, Nour took up a Tumblr challenge in 2014 to draw herself as a range of superheroes. As a hijab wearer, naturally all of Nour‚Äôs warrior women were also wearing a hijab, challenging the dominant expectations of superheroes. By incorporating her religion, Nour reimagined well-known superheroes, such as the Avengers character Hawkeye, and created some of her own.

Most superheroes are not linked to any religious faith, but Nour‚Äôs reimaging of the superhero inspired a big response, with people from all over the world contacting her to request certain characters or movies. Social media played a huge role in the spread of Nour‚Äôs work, offering people a means to share her ideas and support her work. Click here for a really great article on Muslim characters in comics, including Nour‚Äôs work.

Along with the Olympic fencer Ibtihaj Muhammad, hijab-wearing warrior women (both real and imagined) are becoming more common, most importantly in the national representations of male-dominated sports and arts. We all look to women, both created and of flesh and blood, as role models but also as reflections of ourselves, of how we might one day be. As such, carton characters such as Nour‚Äôs hijabi superheroes break the dominance of white characters in graphic novels, and offer heroes that share religious and cultural associations with their readers.

Nour has gone on to develop her skills and has created a range of characters, some who wear the hijab, and some who do not. At only 17 years old when she released her first illustrations, I am sure that the comic book world is keeping an interested eye on Nour‚Äôs work. You can do the same by adding her on Instagram.

Warrior Princess will be launching soon, so keep checking the Girl Museum website. It¬†will be full to the brim with kick-ass Warrior Princesses, fun and fact-filled podcasts, and some seriously awe-inspiring stories.