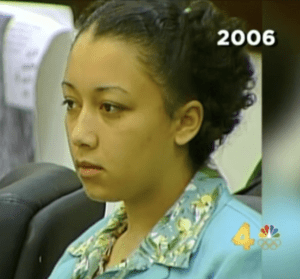 Cyntoia Brown had a tough start to life. She was born with foetal alcohol syndrome and grew up in an abusive household. This led her to run away from her adoptive parents’ house. She began drinking and using drugs as a young teen and it was at this time that she met a man known as “Cut Throat”. He physically and sexually abused her before forcing her into prostitution.

On the 7th of August 2004, a 43 year old man (Johnny Mitchell) solicited Cyntoia for sex. They went back to his house where Cyntoia saw a gun in the cabinet. When she fought off his advances he reached under the bed. Cyntoia thought he was going to grab a gun so in self-defence she took a gun out of her purse and shot him. Cyntoia was just 16 years old.

Cyntoia was charged as an adult and was found guilty of first degree murder, first degree felony murder, and aggravated robbery. She was sentenced to concurrent life sentences and 8 additional years. The length of the sentence and the fact that she was tried as an adult caught criticism in Tennessee, as a result in 2012 the Supreme Court banned mandatory life sentences without parole.

In 2011, a documentary was released titled Me Facing Life: Cyntoia’s Story. It details her arrest and trial and after airing on PBS and the BBC her story garnered international attention. In late 2017 a number of high profile celebrities brought her story to social media: Lebron James, Rihanna, and Kim Kardashian used Twitter and Instagram to share the case with their millions of followers.

In May of this year she went before a parole board who were split as to what to do with Cyntoia and so the case was passed onto the Governor of Tennessee. Advocates have worked for years to help Cyntoia arguing that victims of sex trafficking should not be punished in the way the she has been. Time will tell if clemency will be shown to her.