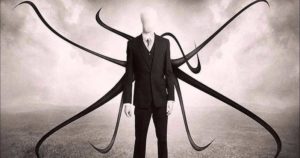 Slender Man came into being in 2009 on the Something Awful internet forum. He was portrayed as a paranormal character who abducted children. The photo-shopped photos quickly went viral and inspired fan fiction, cosplay and artwork from around the world. It led to a YouTube channel, a video game and an episode of Supernatural that centred on a similar character (this one called Thinman).

However, since 2014 Slender Man has become synonymous with a brutal crime in Wisconsin. In May of that year two 12 year old girls held down a 14 year old girl and stabbed her 19 times. Peyton Leutner dragged herself from the forest to the highway where she was rescued. After spending 6 days in hospital she was released and returned to school later that year.

The two girls (Anissa Weier and Morgan Geyser) were arrested shortly after the attack and admitted their role in the attack. They told the police officers that they believed that Slender Man was real. They believed that by killing their friend they would become proxies for him as well as protecting their families. They also believed that they would get to live in Slender Man’s mansion afterwards. Both girls were found not guilty by reason of mental defect or disease. Anissa was sentenced to 25 years to life while Morgan was sentenced to 40 years to life.

This crime led to an increase in the awareness of the general public of Slender Man which in turn led to strong criticism of the character. A documentary was made on the crime, and Law & Order: Special Victims Unit used this crime as inspiration for an episode in their sixteenth season. Earlier this year the Slender Man movie was released to bad reviews and a bad performance at the box office. Many people feel that this crime was the beginning of the end for the Slender Man community.

This crime led to a bigger conversation about the dangers of the internet for children and young people. While it can be a great source of information and offer people a community of friends there are without question more dangers online today then twenty years ago. Parents and schools need to be more aware of what is out there so they can properly educate children on material that is not suitable for them.