Did Glee and GQ Cross the Line? 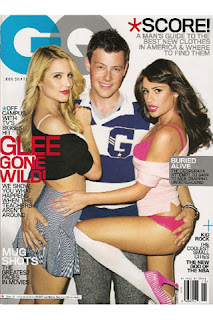 http://cdni.condenast.co.uk/320×480/g_j/glee_GQcover_20oct10_terryrichardson_320.jpg
Glee is one of the most popular shows on American television right now. A bit of a surprise perhaps, given that it’s a show about an Ohio high school glee club’s members‚Äîincluding the teachers‚Äîtrying to survive the perils of high school. It is immensely popular, however, and the media surrounding it proves that it reaches a wider audience than one would perhaps expect, while still trying to broaden that appeal further.
I can’t deny that I was addicted to the first season, perhaps because I was in a high school show choir myself. And although I haven’t been able to watch any of the second season so far, I’ve been unable to miss at least some of the media furor. The largest controversy revolves around a recent photo shoot for the November issue of GQ Magazine. In it, Glee stars Lea Michele and Dianna Agron both pose seductively, and, especially in Lea Michele’s case, in a rather minimal amount of clothing (neither are nude, however). Cory Monteith is also in some of the photos, but remains fully, and by comparison, demurely clothed‚Äîif a word such as “demure” can be applied to a male in these circumstances.
As with most things, I try to see both sides of the argument. On one hand, Lea Michele and Dianna Agron are both 24, well over the age of consent (Cory Monteith is 28), and GQ is a men’s magazine, targeted to men over 18. On the other hand, Lea Michele, Dianna Agron, and Cory Monteith are all playing high school students‚Äîand that is how many of their younger fans view them. Additionally, the purchase of GQ is not restricted to over 18 year olds.
I can’t deny that in many ways I feel this is much ado about nothing, though to an extent I can see why the Parents Television Council is offended by the photo shoot and the marketing of the show in the manner.¬† The PTC feels that aspects of the photo shoot verge on ‚Äúpedophilia‚Äù because the actors are playing characters under the age of 18, and are more or less posing as these characters.¬† While I disagree with that aspect‚Äîthe characters are under 18, but the actors are not‚ÄîI do believe the photos are in rather bad taste. What I tend to find more offensive than Lea Michele’s open-legged pose on a locker room bench is that the women are scantily clad, while the lone male is always fully dressed.¬†¬†


I find the photo shoot sexist, perhaps, but I’m not sure I would exactly classify it as offensive. All the participants are over 18 years of age, and the photo shoot is for a men’s magazine, so I don’t view it as bordering on pedophilia. It is not perhaps the wisest marketing choice for Glee; many people, children and adults both, view and identify the actors as their characters, and as such posing so clearly as high school students is probably inappropriate. Even so, it is up to the individual to differentiate between fiction and reality. But mostly, I feel the photos are in bad taste, regardless of the setting and characterization.¬†
-Katie Weidmann
Junior Girl
Girl Museum Inc.
DONATE NOW