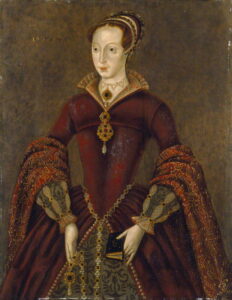 The Streatham portrait now in the National Portrait Gallery. It is not from life, being either from a template or an earlier portrait, but there is certainly a strong familial resemblance between this Jane and the surviving portraits of her sister, Catherine.

The Tower of London has had many residents over its 923 year existence. From Guy Fawkes, to the Kray twins many of its residents have been political outcasts or notorious criminals. In 1554, Lady Jane Grey became resident of the tower. She was the shortest reigning monarch in British history, a reluctant queen, and a young one at the tender age of 16.

In 1553 King Edward VI died and crowned Lady Jane Grey as his successor to the throne. As well as being blue blooded, Jane was beautiful and intelligent. She was a master of languages, having studied Latin, Greek and Hebrew, she was also fluent in French and Italian. The young Queen was reluctant to take the throne. When first offered the crown she refused fearing the public’s reaction. Her husband wished to be proclaimed King but Jane refused, wanting to await an Act of Parliament. Although a reluctant Queen her short reign was kingless, this girl was in charge. Her apprehension to accept the crown also stemmed from her not being in direct line of rule. She was very aware that the public may favour a monarch who was in direct succession to Edward VI. She was right. Her reign, however, was fraught with other issues. Prior to her imprisonment in the tower, one of Lady Grey’s advisors Sir Thomad Wyatt conspired against the marriage between Mary and her Spanish husband to be. This was done on the basis of religion. Sir Thomas feared a catholic queen. However support for Mary, the Daughter of Henry VIII was strong. Following this Jane and her Husband were taken to the tower on the 19th of July 1553, just 9 days after the start of her reign. This was a postponement of the original date the 9th of July. She was no longer queen and the tower was no longer her palace. Her royal entourage abandoned her and her husband in an attempt to save their own heads.

The young couple resided in the tower for nearly a year. Mary felt that she could not sentence her cousin to death in good conscience and gave Jane the opportunity to avoid an untimely demise and convert to catholicism. Jane, a storch protestant refused. The young couple were separated in February 1554 when her husband Guildford was executed following a charge of high treason in November of the previous year. She was granted a private execution and beheaded shortly after.

Jane has made history, after Mary’s unsuccessful reign Jane became a protestan martyr. She was a queen but also the shortest reigning monarch in British history. A highly intelligent girl with a bright future she was confined to a role she did not want by virtue of her blood line and met a gruesome end usually given to criminals and political conspirators. Remains of her can be found in the fireplace of Beauchamp Tower where her name is carved.