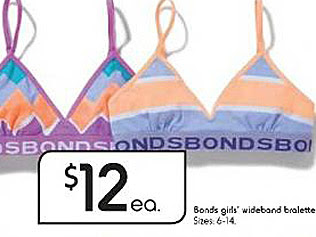 The purchase of my first bra is not a happy memory. I remember being mortified when my mother proudly informed her friends of this momentous occasion. I had no desire to blossom into a young woman ‚Äì boobs were for grownups – a segment of society which I had no intention of ever joining. This is why I have been baffled by a recent report that Australian underwear company Bonds have released a line of brightly coloured bras targeted at girls as young as six named ‚Äòbralettes‚Äô.¬†
Media and members of the public are in an uproar over this perceived ‚Äòadultification‚Äô of young girls. Bonds‚Äô decision has been called ‚Äòirresponsible‚Äô and their motivation behind the move deemed to be ‚Äúgreedy money-grubbing‚Äù drive purely by profit. People have called for a boycott of Bonds‚Äô products and the company have decided not to stock the bras outside Australia.¬†
Had it not been for Samantha Bradbeer‚Äôs recent post on the growing trend of early puberty in girls, I probably would have joined the ranks of these irate commenters but now I‚Äôm not so sure. Bonds have defended their decision saying girls were maturing earlier and looking for support and ‚Äòconcealment‚Äô, and based on recent research perhaps they have a point.¬†
While it is fairly obvious that few girls as young as six will require a ‚Äòbralette‚Äô, at least those that do mature early have options. And by presenting brightly coloured ‚Äòfun‚Äô options maybe a sense of normalcy can be achieved in what is potentially a traumatic change for girls experiencing early onset puberty. It also seems to me that parents are looking for someone to blame rather than making sensible parenting decisions on their own.
Instead of demanding that Bonds withdraw bralettes because they are feeling pressured by their daughters to purchase them, couldn‚Äôt they just say no? Every time that their child asks for a toy or sweet, which they don‚Äôt want to purchase, they certainly don‚Äôt insist that the company withdraw it. But really more to the point, how many six year olds really want a bralette, or of those who do, how many would actually wear theirs? Once they realise that they are uncomfortable and unnecessary surely they are discarded and left to lie forgotten in the bottom of a dresser drawer.¬†
What do you think about Bonds‚Äô decision? Is there a real problem here or is this just a storm in an A cup?
– Briar Barry
Junior Girl
Girl Museum Inc.
DONATE NOW