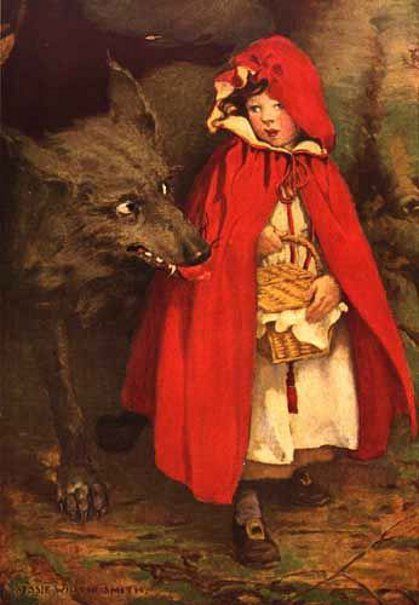 The story of Red Riding Hood is known throughout the world, with the origins debated as being either Europe in the 11th or 17th century, the Middle East, or even China. While these stories are all fairly similar, they belong to two threads. One of these is The Wolf and the Kids, which originated in the 1st century CE in the Middle East. The other thread is the European tale that culminated in Le Petit Chaperon Rouge by Charles Perrault. The latter translates to “Little Red Riding Hood”. Both threads are visible in the anthologies by Jacob and Wilhelm Grimm, dating to the early 19th century.

While all of the 58 discovered versions of the tale are all fairly similar, the antagonist can range from a tigress to an ogre; it’s not just tales of wolves considered to be a variant. For example, the Chinese tale of Grandaunt Tigress follows the story of a young girl being chased by a tigress in order to be eaten. This makes sense, as tigers were far more common in China than wolves would have been, so it’s a sign of the tale being adopted into a culture.

If we follow the thread of The Wolf and the Kids first, we find that a recent study by James Tehrani at the University of Durham has uncovered that this is the original tale through a comparative computer algorithm. Instead of the wolf dressing as a human, she instead impersonates a nanny goat in order to eat all of the young goat children. The story has also been retold as Number 5: The Wolf and the Seven Kids by the Grimm Brothers. In this thread, the mother goat leaves the house and encourages her children to be on constant guard for the wolf. On his arrival he employs several tricks to mask his identity, such as consuming chalk for a softer voice and sprinkling flour on his paws to make them appear white. The kids were eventually fooled and opened the door to the wolf, who instantly devoured them all whole and fell asleep in a nearby meadow. Their mother returned and found the wolf, then devised a plan. She cut his stomach open with some scissors to rescue her children before encouraging them to find stones which were sewn into his stomach in their place. When the wolf awoke, he rushed to the river to take a drink. In doing so, the stones caused him to fall in and drown. This story not only closely shows links to the known Little Red Riding Hood, but also to the story of The Three Little Pigs.

In contrast, we have Le Petit Chaperon Rouge, written by Charles Perrault in the 17th century. This particular thread draws inspiration from other European stories; such as the 14th century Italian La Finta Nonna, translating to “The False Grandmother.” This particular tale was written by Italo Calvino and featured in the Italian Folktales collection. There is also a poem dating to the 11th century in Belgium, where it was recorded by a priest that a girl wearing a red baptism tunic was devoured whole by a wolf.

Le Petit Chaperon Rouge also features in the Grimm Brothers anthologies as Tale 26: Little Red Cap. This story tells of a child on the way to visit her sick grandmother when she comes across a wolf. As she had not been taught to fear him, she answers his questions honestly about her visit to her grandmother in the woods. The wolf distracts Little Red Cap with a meadow of beautiful flowers, before rushing to the grandmother’s house and devouring her whole. When the girl arrives, he also eats her before falling asleep. A huntsman comes across the sleeping wolf and slices him open to save both of them, before skinning the wolf and wearing his pelt as a trophy.

While both are very similar, it is Little Red Cap that is almost identical to the story we know today. But sadly, neither of the original tales feature the (in)famous line “the better to eat you with.”

If you’d like to read more about James Tehrani’s discovery, you can check it out here.