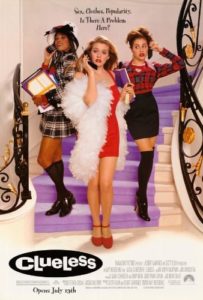 Clueless, released in 1995, has gone on to become a classic teenage movie with a cult following. Based loosely on Jane Austen’s Emma, below its comedic surface, the messages of femininity and girlhood run much deeper.

Importantly, Clueless was written by female director Amy Heckerling and has an almost all female cast. The film centres around many issues central to a girl’s life and has thus been spreading these messages for over 20 years.

The film follows popular girl Cher Horowitz’s high school life in Beverly Hills as she works to give classmate, Tai, a makeover. Cher however, does soon learn that there are more important things in life than popularity and beauty. This successfully gives more depth to the character than the usual portrayal of teenage female personalities. Even the prominent theme of fashion, a stereotypical female theme, is used in a positive way to communicate that girls can express themselves and decide who they want to be.

Cher represents female empowerment, shown as unafraid to stand up for what she wants without caring what other people think of her. She is also not ashamed to talk about sex and her virginity, teaching guys a lesson of ‘no means no’ and proudly showing girls that is it OK for everyone to move at different rates. This is still such an important lesson for teenage girls as we see young, vulnerable girls being forced into situations they are not comfortable with due to peer pressure.

Clueless even puts female friendship, often portrayed as malicious, into a positive light. By supporting and empowering one another, the girls show that not every girl group has to conform to the preconceived image. The friendship group is also entirely inclusive with black and gay characters who are as strong and powerful as the pretty blonde lead.

Of course, it’s not perfect. As women fight for and gain ever more independence, Clueless is outdated in its focus on women chasing men and seeking validation from them. However, there is still no doubt that Clueless is relevant to girl’s today, providing a safe, feel good environment to reflect on female issues so that we too can take on being strong, independent girls alongside Cher.