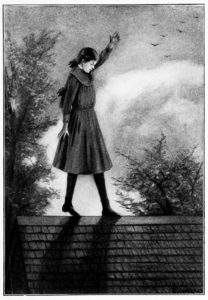 Illustration from the 1909 printing of Lucy Maud Montgomery’s Anne of Green Gables.

If I had to answer the question “Who is your girlhood heroine?” I would definitely say Anne of Green Gables! A large part of my childhood, and – I should confess! – part of my adolescence, were affected by this fictional character. The anime version of Anne of Green Gables was adapted from the popular children’s book written by Lucy Maud Montgomery, who lived during the early 20th century. Both depict the life of Anne, a young orphan. She was sent to a pair of siblings in their 50s, Marilla and Matthew, instead of the boy the couple asked for, as they wanted help on the farm. Though they initially planned to send her back to the orphange, day-after-day Anne inspired and captured the attention of Marilla and Matthew, who decided to keep her, raising her as if she were their daughter.

My grandparents raised me in a small Italian village, located in the countryside, where I lived until I was 18 years old. I was a strange girl, who loved outdoors activities and was inclined to day-dreaming. This helps to understand why I identified myself with this fictional heroine . . . and it explains why I attempted to change my hair color! If I reflect upon my fascination with this character, I would say that I loved her ingenuity, bravery, sweetness, and intelligence.

All in all, those are attributes which I cultivate, even now.