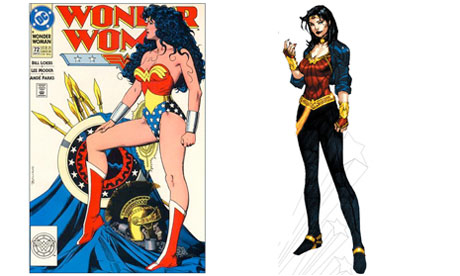 http://www.guardian.co.uk/books/2010/jun/30/wonder-woman-new-outfit
Wonder Woman is finally changing her clothes after nearly 70 years in the same outfit. So away goes the corset and giant knickers and in comes leggings (very fashionable these days), flat shoes and a trendy jacket. It’s great to see an update of a character that hasn’t changed fashion since the middle of World War II. It’s a shame she missed out on an 80’s perm or geometric eyeliner during the 60’s but one thing is quite apparent that this is a male led change; she is keeping her large breasts. An article in the Guardian points out that when the female author Jodi Picoult was drafted to work on Wonder Woman in 2006, she sought to reduce the breast size but was unsuccessful.
Women writing for mainstream comics are not at all unusual but the idea that comics are solely for boys still prevail. The TV show The Big Bang Theory contains many scenes that take part in a comic book store, where the presence of a girl is highly unusual and creates social dilemmas for the boys in the shop. The small act of keeping Wonder Woman’s breasts large shows the innate sexism that is still prevalent. Realistically, Wonder Woman’s breasts would be impractical in the work she does, and yes I know, superheroes are not about realism, but it still smacks of misogynism. And while we’re onto misogynism, why not buy a t-shirt that says ‘I Love Boys that Rock‚’ inspired by many Marvel comic book heroes or you can pick up Marvel flavoured lip gloss. It seems it’s ok to be a girl because things can be sold to us, but come on, at least help us out a little when it comes to realistic breast size.
Go read a comic written by a woman. Read a version of John Constantine: Hellblazer by Denise Mina, a Scottish crime writer. Read Tamara Drewe by Posy Simmond (which has been made into a film) or Unholy Kinship by Naomi Nowak. Read Ghost World by Daniel Clowes, where girls are portrayed realistically. Go read a comic where the breasts don’t get in the way and leave that to the 13 year old boys. And before you start, read the (archived) blog Girls Read Comics. You’ll not be disappointed.
-Julie Anne Young
Junior Girl
Girl Museum Inc.
DONATE NOW