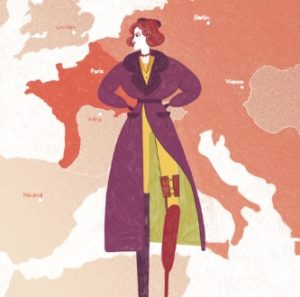 Virginia Hall, from the Goodnight Stories for Rebel Girls podcast. Fair Use.

Good Night Stories for Rebel Girls is a global best-selling, and New York Times bestselling book written by Elena Favilli and Francesca Cavallo. As of March 2018, Elena Favilli and Francesca Cavallo have turned Good Night Stories for Rebel Girls into an equally successful podcast. Episode three is narrated by author S. Mitra Kalita, the vice president for programming at CNN Digital. S. Mitra Kalita reads the inspirational story of Virginia Hall Goillot, sharing the life of the American spy. Mitra Kalita starts by introducing the podcast and its aims to encourage girls to “dream bigger, aim higher and fight harder.” She then goes on to tell the story of Virginia Hall.

Virginia grew up in Baltimore, Maryland, and spent a lot of time in her family’s second home at a farm just outside of their town. Exploring the grounds, she eventually learned how to hunt with her father. This adventure, of course, started her on the path to her eventful life.

She started her career working as a consular clerk in Poland, Italy, Estonia and Turkey for the U.S. Foreign Service. However, while hunting in Turkey in the early 1930s, she unfortunately misfired her gun at her left foot while climbing a fence. Despite getting to a hospital quickly, gangrene had set in and her leg was amputated at the knee. Virginia Hall was an incredible woman — with her new life with one leg, she didn’t let her disability stop her. She slowly learned how to walk again on her wooden leg which she charmingly nicknamed “Cuthbert.” Her next heartbreak came from U.S. Department of State, from which she received a rejection letter as they only took applicants from ‘able-bodied people’ and that being an amputee was a “cause for rejection, and it would not be possible for Miss. Hall to qualify for entry into the Service under these regulations.”

The Second World War gripped the world and Virginia sprang into action to save lives of many, volunteering for the French ambulance service which eventually sent her to the front line. At the time, Paris was occupied by the Germans and covered in swastika flags. Concerned for her Jewish friends and desperate to help, she became a spy with the British Special Operations Executive, a group which was nicknamed “Churchill’s Secret Army.” She went undercover in occupied France, under the name of Brigitte as a ‘correspondent for the New York Post.’ She was collecting evidence on what the Nazis were doing in occupied France, as well as helping the resistance. This work was dangerous. Because part of her job was to help prisoners of war escape German prisons, the Gestapo eventually caught on to what she was doing and named her “the most dangerous of all Allied spies” with clear instructions from the Gestapo that they “must find and destroy her.”

Hiding and disguising her identity wasn’t easy; it was hard to hide her wooden leg, and her limp. She ended up at the top of the Gestapo’s most wanted list in Nazi-occupied France, infamously known as the “woman with a limp.” The longer Virginia stayed doing this work, the more dangerous it became — especially when the Nazis were working to cut off her escape route in southern France. However, she did escape, making her way across snowy mountains on foot. With the help of Cuthbert, she walked for miles to escape, and she eventually made it to Spain, safe from the Nazis. In 1945, Virginia was awarded by the Distinguished Service Cross by President Truman (the only female civilian in the war to be granted this award) and only invited her mother to the ceremony. The International Spy Museum in Washington D.C. now have a permanent exhibition about her.

The focus of this podcast is undeniably on the strength, resilience and bravery of Virginia Hall, fighting fearlessly as one of the Gestapo’s most wanted spies. Virginia was admirably so set on helping others that this risk never fazed her. Virginia, because of these attributes, is of course a great example of a ‘rebel girl.’ She refused to be stopped by her disability or by her rejection letter from the U.S. Department of State. This tireless determination to save others led her to become one of the most celebrated female spies of the Second World War and an inspiration to young girls today. The episode charmingly ends with narrator S. Mitra Kalita’s young daughters reading the credits.