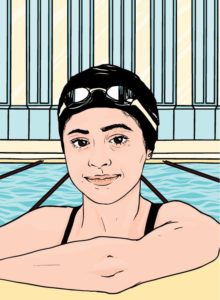 Good Night Stories for Rebel Girls is a global best-selling, and New York Times bestselling book written by Elena Favilli and Francesca Cavallo. As of March 2018, Elena Favilli and Francesca Cavallo have turned Good Night Stories for Rebel Girls into an equally successful podcast. Episode One is narrated by Diana Nyad, American author, journalist, motivational speaker, and long-distance swimmer. Diana reads the inspirational story of Yusra Mardini, sharing the life of the Syrian refugee and Olympian.

Diana Nyad is the perfect narrator to share the story of Yusra Mardini. Diana herself is too a professional swimmer — having swum in the 1970s and the first person to swim from Cuba to Florida without the aid of a shark cage, swimming 111 miles in 53 hours from Havana to Key West. She eloquently speaks about Yusra with an obvious admiration for her, clearly admiring both her swimming and humanitarian work.

The podcast starts with Yusra Mardini’s childhood, beginning with “once upon a time in Damascus, Syria, there was a swimmer called Yusra. Yusra hadn’t always been a swimmer — when she was little, she was too scared to get in the pool.” Diana Nyad, backed with charming music and sound effects of splashing water, tells the story of Yusra growing up to love swimming after being taught by her father and sister.

Of course, with the war and humanitarian crisis in Syria, and Yusra’s hometown of Damascus, the episode doesn’t only discuss Yusra’s swimming. By the time Yusra was 13, the country was entirely gripped by civil war. The Good Night Stories for Rebel Girls podcast makes the situation in Syria accessible for younger listeners, focusing on how Yusra’s family coped in the conflict and the swimming centre that Yusra trained in being bombed. The podcast touches upon the inevitable spreading of the fighting reaching the suburbs of Damascus where Yusra’s family lived.

Yusra and her family were no longer safe to live in Damascus, living in constant fear watching their city being destroyed. It was decided that she and her family flee to Europe when their home was bombed and destroyed, having lost everything they owned. The plan was for Yusra to flee, with her older sister Sarah, but without her parents and younger sister. So, they left for Berlin. In such a terrible time of Yusra’s life story, Diana Nyad maintains the accessibility and relatability for younger listeners, touching upon Yusra’s hope that Berlin would have a good swimming centre that she could continue to train in. Diana Nyad compassionately discusses the violence, using simple and understandable terms to give a basic understanding of what was, and is, taking place in Syria.

Throughout the episode, Diana Nyad speaks about how unwelcome refugees from Syria can be made to feel in parts of Europe. Yusra and her sister Sarah paid smugglers to get them to Berlin, on a small dinghy. They left late in the night, avoiding coast guards. Far into the sea, Diana Nyad tells Yusra’s terrifying story of this boat journey — the smugglers had put 20 people into a dinghy that was intended for no more than 6, with most of these passengers unable to swim. Yusra and Sarah jumped out of the dinghy, and swam for three hours in the sea to push the sinking boat to safety, using her talent and risking her life to help save the lives of many others. Diana Nyad used the small poignant details to illustrate the incredible strength this would have taken for Yusra – one of the passengers of the sinking dinghy was 6 years old, so Yusra pretended to not feel the intense fear she felt, and focused on making the little boy laugh.

Incredibly, they made it to shore. Crossing borders and hiding along the way, the group found their way to a refugee camp near Hungary, later running away to Berlin where her parents and sister have now joined them. A month-long trip and nine countries later, she now lives in Berlin and joined a swimming club. Yusra rose to fame in the 2016 Summer Olympics in Rio de Janeiro in one of the first refugee teams ever to compete in the Olympics. As one of ten athletes, Yusra competed as one of the youngest competitors. She raced in the 100 meter butterfly swim, and won.

The podcast even delicately touches upon the refugee crisis, poignantly ending on the quote “even without a country, you are someone.” Yusra was appointed by the UNHCR Goodwill Ambassador as the youngest participant at the 2017 World Economic Forum in Davos, Switzerland, which she has shared on the WEF blog.

As with all the episodes of the Good Night Stories for Rebel Girls podcast, and of course the books too, the focus is always on the strength of these inspirational girls. Despite, and because of, Yusra’s terrifying journey to the point she is at today, she continues to use her fame to highlight the current global refugee crisis and how this affects other young girls like herself. Speaking in a press conference she eloquently said: “I want everyone to think refugees are normal people who had their homelands and lost them not because they wanted to run away and be refugees, but because they have dreams in their lives and they had to go.”