How to Fall in Love with Comic Books: Girl Edition 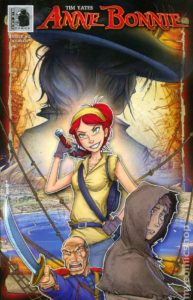 How to Fall in Love with Comic Books: Girl Edition

Comic store shelves are littered with sexist portrayals of female comic book characters and the reluctance to make girls an equal part of comic narratives. This is what first scared me when I began to look into reading comic books. I glanced at shelves, seeing only more copies of Avengers and Batman, or illustrations of women that were hyper-sexualized and, in some cases, degrading. Now, I’m all for artistic license — and I recognize that there will probably always be a market for this sexualized material so long as our societies perpetuate such stereotypes. But it’s not the only thing that sells.

Complex, multi-faceted female characters sell, too. It wasn’t until my comic-loving friends encouraged me to look deeper, to explore titles hidden on the shelves, that I discovered a treasure trove of stories about girls — including young girls.

One of my first encounters was with Anne Bonnie from BlueJuice Comics. The comic tells the story of Ariana, a teenager who loves to get into trouble. She sets sail on the Great Sea, a world of magic, danger, and excitement, as she journeys to discover the truth about who she is and what it means to be a pirate. She’s an unlikely heroine who also stands up for those who are abused and suffering, is really playful and optimistic, and fully believes in herself and her abilities — even though she isn’t quite sure what those are yet. I fell in love with this series from its first issue, embracing the semi-historical look at the world of piracy and the fantastical world that Ariana inhabits — full of elves, magic, and merfolk.

Next up was the new incarnation of Ms. Marvel, Kamala Khan. Kamala is a Pakistani-American teenager living in Jersey City. Though respectful of her heritage, Kamala knows she’s different: she’s nerdy, doesn’t meet Eurocentric standards of beauty, and constantly questions her strict parents’ rules. She’s also a huge fan of Carol Danvers, the original Ms. Marvel, and — for all other purposes — a fairly normal teenager. And like any teenager, her adventures begin when she sneaks out to attend a beach party late one night. But at that party, she faces relentless teasing. Angry and disappointed, Kamala is on her way home when the unthinkable happens: she is enveloped by a strange mist and given superhero powers. The resulting series is an exploration of what it means to be a teenager, an outsider, and a good person. It’s a series that delves into some serious questions at times, asking readers to reconsider our notions of Muslim culture, the “inherent laziness” of the current teenage generation, and the power within each individual to positively impact the world around them. It also focuses on personal questions that every girl faces, ranging from family disputes to dating and school to finding purpose and meaning in life. Overall, I’ve fully enjoyed Kamala Khan as a realistic reincarnation of this beloved superhero.

Another comic series I love is Cleopatra in Space. This series is about the real Cleopatra — you know, the ancient Egyptian queen who went down in history as the last pharaoh and for her trysts with Julius Caesar and Marc Antony. But, it takes place before all of that happens. When we first meet Cleopatra, she’s a teenager in ancient Egypt — one who hates her school lessons and constantly sneaks off to get into trouble. But that trouble catches up to her when she finds a mysterious tablet that transports her far into the future. There, she encounters a world where humans and cats work together. She also learns of an ancient prophecy that says she is destined to save the galaxy from the evil Octavian — another nod to history. But that doesn’t mean Cleopatra gets to jet off into the stars to fight evil. It may be the future, but Cleopatra still has to attend school. So she enrolls at Yasiro Academy, where she’s tutored and trained to fulfill her destiny. Along the way, she also faces realistic issues: making friends, having crushes, passing exams, and questioning what the future holds, what home really means, and whether she’s truly the savior that the galaxy wants her to be. Like Kamala, Cleopatra is a girl whose life blends the real and fantastical into a narrative that young girls can relate to. She’s a complex character, whose dreams of being more than just another girl lead to crazy, often trouble-filled adventures that help her discover who she truly is and who she wants to become. But one of my favorite aspects of this series isn’t her grand adventures or love for trouble, it’s Cleopatra’s relationship with her school roommate, Akila. Akila is the first to befriend Cleopatra, and their relationship explores what it means to be a friend and the responsibility that we have towards our friends, even when trying to save the galaxy.

Another futuristic girl is from the series Rocket Girl. DaYoung Johansson is a 15-year-old cop from a high tech alternate reality set in 2013. As part of the New York Teen Police Department, DaYoung travels back in time to 1986 to investigate a megacorporation and save the world before it’s too late. Admittedly, I’m not a huge fan of Rocket Girl, but that’s more my personal preference. DaYoung’s world is very technological and scientific — sometimes a bit too much for my own tastes. But for any STEM girl out there listening, this is a great comic about a young girl, future technology, and how our actions today can shape what happens tomorrow. There’s a lot of time-traveling, high-flying action, and gorgeous illustrations that explore the world of 1986 and the alternate future that we could have had.

Now, for something different. The modern age of comics has opened up the realm to a wealth of protagonists — and young girls aren’t always center stage. But, sometimes, instead of being the sidekick or background character, girls are equals. One of my favorite comics like this is the series Korgi. It follows the adventures of Ivy, a young girl, and her Korgi puppy, Sprout. They live in Korgi Hollow, a folklore-inspired realm where Sprout and Ivy get into lots of adventures. It’s a lovely little gem in fantasy with gorgeous illustrations, but my absolute favorite aspect of this comic is that there is virtually no dialogue. Except for a little bit of narration at the beginning and end, the Korgi comics focus solely on telling a story through images alone. It leaves a lot for your imagination to explore, and I’ve always found new details each time I read them. It’s a perfect series for all ages — I can picture reading it with a toddler and finding a completely different story than if I was reading it in elementary school or as a grown-up. They’re also just absolutely adorable comics, and, come on, who can resist the tale of a girl and her dog saving their village? It’s definitely worth checking out no matter your age.

Every time I peruse a comic book store, I find new stories that continue to show me how diverse the comic community is becoming. What these many different stories demonstrate is that comics hold something for everyone. Whether you love sci-fi, fantasy, superheroes, or semi-historical adventures, the world of comics is as multifaceted as the many girl characters who now inhabit it. The future of girls in comics looks bright, especially now that major comic book publishers such as DC and Marvel are embracing the call for complex female characters.  Yet I believe that the true gems are these independent publications we’ve explored. They don’t always focus on superheroes — rather, they call into question what it means to be a hero and whether a young girl can be the heroine of her own story without needing superpowers. They explore themes common to us all: friendship, family, and finding and embracing one’s own destiny. They grapple with issues that all young girls face, such as body image, relationships, and school. They also give young girls characters with which they can personally identify and who can help them explore their own lives, dreams, and hopes for the future.