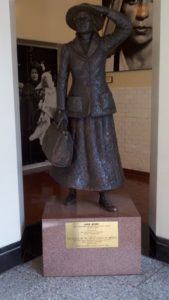 In this column, I’d like to celebrate the Cultural Landscape of Girlhood.  Cultural landscapes is a branch of study that looks at how an entire landscape — not just a building, but the land, artifacts, and monuments surrounding it — impacts our understanding of history and culture. Everything around you shapes your daily experiences — from how far you drive to school to how accessible resources like water and food are to your home. And this has been true for every girl in history — her life is profoundly shaped by the community in which she lives.

In advocating for a better world for girls, we often focus on modern-day problems: access to resources, ability to gain an education, etc.  Yet a major part of inspiring girls and proving that their unique culture is integral to our human history are the stories behind historical sites where girls lived and died.  Where they became the incredible women whom we remember and celebrate today. Where their contributions have not been forgotten.

Our first stop is Ellis Island in the United States. Here, thousands upon thousands of immigrants first stepped onto American soil, hoping for better lives. Among them was one girl whom you can still see today. Her name was Annie Moore, and she was the first immigrant to walk through the doors of Ellis Island on January 1, 1892.

Annie was 17 when she arrived at Ellis Island from her home in County Cork, Ireland. Having spent 12 days at sea, Annie was probably very nervous and excited about the opportunity for a new life in America. She arrived with her two younger brothers, Anthony and Phillip, aboard the S.S. Nevada. With Annie leading the way, they were greeted not only by their parents (who had immigrated earlier), but also by journalists eagerly awaiting to capture the first immigrant to pass through Ellis Island.

As stated in the New York Times article on January 2, 1892, “There were three big steamships in the harbor waiting to land their passengers, and there was much anxiety among the newcomers to be the first landed at the new station.  The honor was reserved for a little rosy-cheeked Irish girl. She was Annie Moore, fifteen years of age, lately a resident of County Cork, and yesterday one of the 148 steerage passengers landed from the steamship Nevada. Her name is now distinguished by being the first registered in the book of the new landing bureau.”

“When the little voyager had been registered Colonel Weber presented her with a ten-dollar gold piece and made a short address of congratulation and welcome. It was the first United States coin she had ever seen and the largest sum of money she had ever possessed. She says she will never part with it, but will always keep it as a pleasant memento of the occasion.”

What became of Annie after that grand ceremony remained largely a mystery until 2006. That year, the New York Times reported that Annie had remained in New York — marrying a German-American and having at least 10 children before her death in 1924.  She is buried in Calvary Cemetery in Queens, under a Celtic cross made of limestone imported from her homeland. She spent her entire life on New York’s Lower East Side, including her residence at 99 Cherry Street.

Today, you can see Annie as she stands in the Ellis Island museum — hat on her head, eagerly awaiting her new life.  There is also a statue of Annie and her brothers on the quayside in Cobh, Ireland. Her image forever represents the millions of people – and girls – who passed through Ellis Island in pursuit of the American dream.