Landscapes of Girlhood: “Finding Comfort” in Seoul and Russia 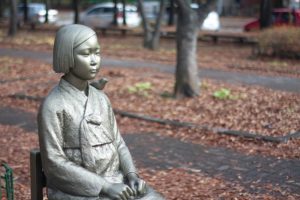 A statue of a girl symbolizing the issue of ‘comfort women’ in front of the Japanese embassy in Seoul. Photo Credit: Wikimedia Commons

In this column, I’d like to celebrate the Cultural Landscape of Girlhood. Cultural landscapes is a branch of study that looks at how an entire landscape — not just a building, but the land, artifacts, and monuments surrounding it — impact our understanding of history and culture. Everything around you shapes your daily experiences — from how far you drive to school to how accessible resources like water and food are to your home. And this has been true for every girl in history — her life is profoundly shaped by the community in which she lives.

In advocating for a better world for girls, we often focus on modern-day problems: access to resources, ability to gain an education, etc. Yet a major part of inspiring girls and proving that their unique culture is integral to our human history are the stories behind historical sites where girls lived and died. Where they became the incredible women whom we remember and celebrate today. Where their contributions have not been forgotten.

Our fourth and fifth stops take us across the ocean this time: first to Seoul, South Korea, and on to neighboring Russia.

In Seoul, in front of the Japanese embassy, you’ll find a bronze statue of a girl quietly sitting next to an empty chair. She represents the “comfort women” — those who were sexual victims of the Japanese military and forced to work in brothels. It was erected in 2011 by the Korean Council for the Women Drafted for Military Sexual Slavery by Japan, and has since served as a center for protests and public calls for reparations.

As we discussed in our podcasts on World War II, the Japanese enslaved Korean girls and women during the war for use by their soldiers in the camps. These women were forcibly removed from their families as teenagers and threatened with torture and death unless they agreed to serve as laundresses, maids, and sex slaves for the Japanese military. 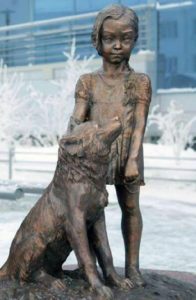 Statue of Karina and her puppy, Niada, at Yakutsk Airport in Russia, as created by sculptor Nikolai Nikitich Chochchasov.
Photo Credit: https://vsuete.com/miraculous-story-behind-girl-with-dog-monument/

Now surrounded by the city, this bronze statue interrupts an otherwise modern landscape — a stark reminder that the past never truly goes away, and the effects of war are always remembered by those whose childhoods — and lives — were cut short. It also still serves as a touch point for international relations, with Japan calling for the statue’s removal as a sign of good will and Koreans refusing to remove the stark reminder of their past. This girl, sitting quietly and bothering no one, and the empty chair next to her serve as a monument to the hundreds of “comfort women” from South Korea — of which only 46 still survive.

This bronze sculpture shows a young girl and her dog, symbolizing the story of Karina and her puppy Naida. In 2014, three-year-old Karina wandered away from her home in the remote Sakha Republic, accompanied by her dog, attempting to follow her father as he departed for his native village. For twelve days, she survived in this remote area of Siberia — unbeknownst to her parents, who each thought the other had taken her. Four days into her ordeal, her parents realized she was missing and launched a search and rescue.

On the tenth day after she had wandered off, Karina’s dog returned home, urging rescuers to follow her. The dog led them to Karina two days later, who survived by eating wild berries and drinking river water while protected by her dog from wild bears, wolves, and freezing temperatures. Today, their story is memorialized at the airport, a reminder of girls and their best friends.