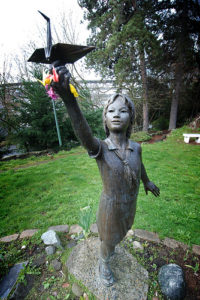 In this column, I’d like to celebrate the Cultural Landscape of Girlhood.  Cultural landscapes is a branch of study that looks at how an entire landscape — not just a building, but the land, artifacts, and monuments surrounding it — impact our understanding of history and culture.  Everything around you shapes your daily experiences — from how far you drive to school to how accessible resources like water and food are to your home. And this has been true for every girl in history — her life is profoundly shaped by the community in which she lives.

In advocating for a better world for girls, we often focus on modern-day problems: access to resources, ability to gain an education, etc.  Yet a major part of inspiring girls and proving that their unique culture is integral to our human history are the stories behind historical sites where girls lived and died.  Where they became the incredible women whom we remember and celebrate today. Where their contributions have not been forgotten.

Our third stop is actually a two-for-one: Seattle Peace Park, as well as across the Pacific, in Hiroshima Peace Memorial Park in Japan. In this park, often surrounded by hundreds of origami paper cranes, is a statue of Sadako Sasaki.

Sadako was a two-year-old Japanese girl who awoke on August 6, 1945. That day, her life would change forever. Just over a mile away, the Americans dropped an atomic bomb on the city of Hiroshima. Sadako was blown out of the window she was near, and later found by her mother alive with little injuries. Gathered in her mother’s arms, her family fled Hiroshima as the black rain began to come down upon them.  As they fled, Sadako’s grandmother decided to return to the house — and was never seen again.

For years, Sadako grew up as normal as any girl could have after that tragedy. Yet, only 9 years later, she began to notice swelling in her neck and behind her ears. The nuclear fallout that she had been exposed to — including the black rain — had caused leukemia to form in Sadako’s body. She was hospitalized on February 20, 1955, at the age of 12. Six months later, she moved into a hospital room with a 14-year-old student who told her about the Japanese legend that promises that anyone who folds one thousand origami cranes will be granted a wish. Sadako’s new friend taught her how to fold the cranes, and she spent the majority of her time using medicine wrappings and whatever she could find to make the cranes. By the end of August, Sadako had folded the 1,000 cranes and continued to fold more — making approximately 1,400 before her death in October of 1955 at the age of 12. Her cranes, and those of made by her classmates, were buried with her.

After her death, Sadako’s friends and schoolmates published a collection of letters to raise funds for a memorial to her and all of the children who had died because of the bombs dropped on Hiroshima and Nagasaki. In 1958, a statue of Sadako holding a golden crane was unveiled in Hiroshima Peace Memorial Park, and later another was unveiled in Seattle Peace Park. At the foot of the statue is plaque that reads, “This is our cry. This is our prayer. Peace in the world.”

Today, Sadako’s statue and story live on as a reminder that nuclear war is devastating and that war itself cuts far too many lives too short.  August 6 is celebrated in Japan as annual peace day and dedicated to her memory.