Let’s Tell and Rewrite the Stories Ourselves 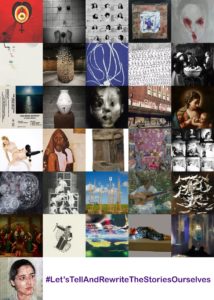 By the end of February, I read somewhere that there was a ‘challenge’ called “Name 5 women artists.” I started thinking about my own list – Abramović, Kusama, Calle, Iturbide and… no-no-no-no, I don’t want to think of Kahlo, please! – and then felt tremendously bad for not being knowledgeable enough. At this point, I don’t think that this has happened because I don’t care. Believe me, I do – and I’ve started to care more than I’d ever imagined. Nevertheless, I’m pretty sure that this is because we do lack in presence and representation within the Art History manuals, not because my particular ‘lack of interest.’

So, I’ve decided to contribute to the tale with the very less I know and the very less I’ve started to come to know: a tiny and fast-paced revision of the multiple stories of Art on my professional Instagram account. Tiny, because I’ve only showed one work by 31 different artists and fast-paced because instead of including some facts about their lives or the artworks themselves, I’ve just used hashtags that tell about the name of the artists, their places of origin, the format of their works, plus the trendy #WomensHistoryMonth and #LetsTellAndRewriteTheStoriesOurselves, which has been created by me and hence, has been used as the name of the project.

Even though I’m still struggling to make my way to curation, I wouldn’t want #LetsTellAndRewriteTheStoriesOurselves to be taken as a curatorial exercise or as a virtual exhibition. When I started my data and image collection for the project, I never had in mind any kind of cohesion between the artists and/or the works I was about to post during the whole month of March. I just wanted to present the ample variety of languages that women have been using for the last 500 years and the topics they’ve all been tackling, which are also quite varied and interesting. For example, I’ve put together a Baroque Italian painter that deliberately painted Mary breastfeeding baby Jesus (nipple included), a young Israeli fashion designer that says that in some years we’d be able to print our own clothes at home next to an Indian artist that portrayed a child bride in her canvas.

There were times in which I didn’t know who to post about and for being able to have a name and a piece, I had to turn to the Internet. When I truly didn’t have a clue at all, I went to Google, searched for a list of all the countries in the world, opened a random name picker and then, selected a country, which I probably haven’t heard of. Then, I searched ‘List of women artists from _____’ and selected a name that I had to research. I have to say that this method wasn’t always successful. There are countries that don’t count with such list and when you google it, the names that appear only belong to men.

For March 27th, I had to post an artwork by a Russian artist and given my lack of knowledge on Russian art – Shout out to my boys: Wassily, Kazimir and Moishe!), I followed the method described above and found the name ‘Olga Zhekulina.’ For my good luck, there was an entry about her on Wikipedia. Short, but still an entry. In it, it was written that she’d painted approximately 200 works but at the time I wanted to see more than the 4 that are featured there, I didn’t find anything and I still wonder ‘Where are the other 196 paintings? Where can I see them?’ I blamed myself for not knowing Russian, for not knowing how to search, but as I’ve said at the start of this post, it’s not my fault. There’s not enough information online about Olga and her paintings because we, women, lack of presence and representation within the Art history manuals. From that very moment, my mission has become to name her and the women that have worked so hard to be seen and listened, some of them even risking their own lives.

So, I’d like to thank Hilma, Graciela, Marina, Malina, Ornela, Katie, Eve, Anna, Yayoi, Alice, Joanna, Ana Paula, Paula, Teresa, Elisabetta, Danit, Amrita, Elsa, Ebony, Geta, Sofia, Vivian, Annalee, Helen, Manal, Adelaide, Varvara, Inez, Sheelasha, Marina, Maria, Olga and all of the women artists for doing what they’ve done and also, to the people that have put some information about them out there. We still have time to uncover and discover stories from brave, hardworking and talented women who have devoted their lives to art. Let’s tell and rewrite the stories ourselves.