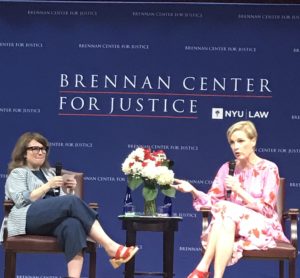 Last week, I had the pleasure of attending an event with activist and former president of Planned Parenthood Cecile Richards in conversation with author and former Obama staffer, Alyssa Mastromonaco. It was a conversation between the two of them that went for more than an hour, and covered everything from politics to gender equality to reproductive rights and events in both of their books. Alyssa’s memoir, Who Thought This Was a Good Idea? was published in 2017 and detailed her time in the Obama White House. Cecile’s book, Make Trouble: Standing Up, Speaking Out, and Finding the Courage to Lead, was published in April 2018. Last month, I saw that the two women were going to be at the Brennan Center at NYU to have a conversation, and I immediately got (free, bless!) tickets to the event.

I’ve admired Cecile Richards for years, and suffice it to say, was way too excited for this event! After the women talked and answered questions from the audience for about an hour, they had a book signing. I was debating whether to buy Cecile’s book, but I knew I really wanted to read it, and where else was I going to get it signed by the author/one of my feminist heroes?!

The event was great, some really tough but good topics were discussed, and I came away from the event feeling more inspired than ever before. Whenever I’m feeling down, I remember a tweet that I saw during/after the first Women’s March in 2017 that says something along the lines of “Remember that feeling you felt today? Bottle it and keep it for when things get hard.” 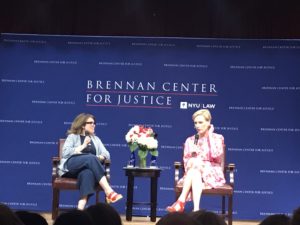 This past weekend, I finished reading Make Trouble in one sitting — I just couldn’t put it down! Cecile Richards has been involved in politics and activism since she was a toddler; one of the first photos of her at age 2 is of her standing next to a campaign sign. In seventh grade, she was taken to the principal’s office for wearing a black armband to protest the Vietnam War. She grew up in conservative Texas as the eldest of four children. Her father was a civil rights attorney and her mother, the late Governor Ann Richards, was an activist and politician. Her activism and political awareness as a girl clearly shaped her young adult and adult life, and I loved hearing about her childhood spent sorting precinct lists at the dinner table!

I thought it was really fascinating to see how her career path zigged and zagged, from labor organizer to Deputy Chief of Staff for House Democratic Leader Nancy Pelosi to her most recent role as President of Planned Parenthood and the Planned Parenthood Action Fund — a role that she had from 2006 to 2018. 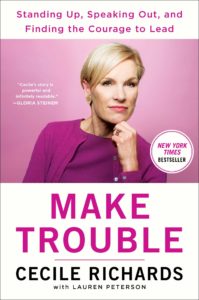 Make Trouble made me laugh out loud (stories of her three children were the best!) and it made me cry (reminiscing about her mother, talking about her and her family’s reaction to the 2016 Presidential election – UGH tears). Here’s a video of her at a Politics and Prose event talking about her book and the future of reproductive rights.

Her memoir also delves into the misogyny and sexism that comes with being a woman in public life, in politics or just being a woman, period. Those sections were a little disheartening (you mean, it happens to her, too? Ugh.) but it was great to know that despite all of the crap that has been thrown at her and all the challenges she’s dealt with over the years, she continues to fight for reproductive rights, progressive values, voter rights, advocacy and being a leader of the Resistance. One of the most relatable parts of her memoir was her retelling the story of her job interview process for the position as President of Planned Parenthood. Two things stuck out at me: a) the doubt, feeling she wasn’t good enough or qualified enough for the role, and b) she called her mom for a pep talk. “Instead I did what any grown woman would do: I called my mom.” That part literally made me laugh out loud, because I’m not ashamed to admit I do the exact same thing, often.

I think it’s interesting (and telling) that even Cecile Richards, a woman who had been involved in advocacy and nonprofit work for decades, was hesitant and/or unsure about taking a position that she (briefly) felt unqualified for. And it all goes back to how girls and boys are socialized, because I feel like for many men, they don’t even think about their qualifications, they just go for something! That was a part of the conversation that my friend and I deeply identified with, and something that Alyssa and Cecile talked about at the event last week. One or both of them said something along the lines of “studies show that when looking at a job application, women feel like they have to have at least 90 percent of what the qualifications are, but for men, it’s more like less than 50 percent.” And Cecile recounted a story of a young woman she knows who was unsure of applying to a certain position because she “hadn’t finished her PhD yet.” Would a man ask himself that question? Probably not.

I finished the book feeling more hopeful and inspired than ever, and resolved to get involved in my (new) NYC community. What the book had also nailed down for me was just how much Planned Parenthood has impacted the lives of women and girls throughout the last century. 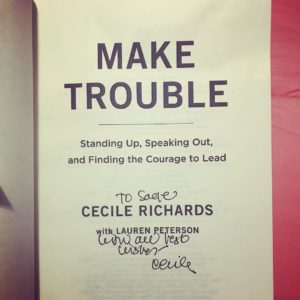 One last thing: as I mentioned above, I got my book signed by Cecile last week, and…wow. I hope I wasn’t as awkward and fangirl-y as I felt, but I was very nervous. I thanked her for her time, thanked her for all the work she’s done for Planned Parenthood and then told her I was writing a recap for Girl Museum — she thinks the museum is an awesome idea, so of course I internally freaked out for the rest of the night. Grateful to have met her, to have read Make Trouble, and I would encourage all of you to put it on your TBR list!

I also just want to take this time to thank my mother, who, when I called her on Thursday night to talk about Cecile Richards/what just happened, was already asleep. I’m sorry I woke you up but thank you for being so excited for me and wanting to hear more about Cecile, even though I’m sure you just wanted to go back to bed!