Margaret of Antioch was born the daughter of a pagan priest at the end of the 3rd century CE. She became a shepherdess after her father banished her from his home upon learning that she had converted to Christianity. Olybrius, the Roman Governor, proposed to marry Margaret if she renounced her faith. She refused and was imprisoned and tortured.

Her story states that Satan visited her in the shape of a dragon and swallowed her, but the cross she carried burned his throat, so she escaped alive. She was eventually beheaded, after several attempts to burn and drown her proved unsuccessful. Attacked by real and fantastical enemies from both inside and outside of her faith, Margaret died defending her right not to marry. 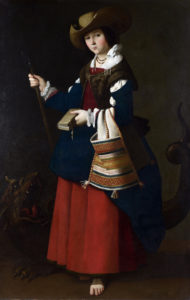 Zurbaran’s paintings of female saints are represented as idealized women of Spain. This image of Saint Margaret is unusually signed by the artist and thought to not be a part of his larger series, which were often completed by assistants.

In the painting, Margaret wears picturesque Spanish costume, which is highly detailed and notes the skill of de Zurbaran. She holds a shepherd’s crook in reference to her occupation as tending grazing sheep for her nurse. She seems oblivious to or unconcerned by the satanic dragon that emerges from the shadows behind her. This ivory figure of St Margaret depicts her escape from the bowels of the dragon. Parallels were drawn between her ordeal and the pain of childbirth, and she has became the patron saint of pregnancy and women in labor.

The unknown artist has carved the action as one continuous moment, adding a dynamic quality to the static image as Margaret bursts forth. It is almost as if capturing a single moment: Margaret’s dress still hangs from the open jaws of the beast as she bursts forth from his insides.