Memories of Girlhood: Camping in Scotland 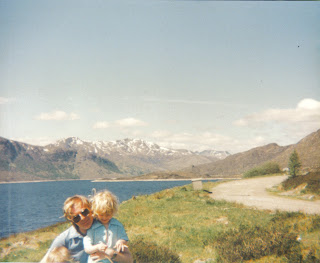 Junior Girl Sarah and her dad (and the top of her sister’s head) on holiday in Scotland in the early 90s.
When I was a girl, many of my friends went on holidays abroad whilst my family stayed in the UK. I can’t remember being specifically jealous that they were spending their holidays on sunny and sandy beaches but it wouldn’t be surprising if I was. My dad didn’t like to fly or sail, but still wanted to get away from it all, so my parents bought a motor caravan and off we would go, usually to Scotland.
I can’t remember now if I was jealous of my friend’s exotic holidays, but it doesn’t matter to me now, because I wouldn’t change those summers spent in Scotland for anything. The memories I have are vivid and mostly hilarious‚ many of the stories we reminisce over have passed into something like family legend. There was the time a horse decided he was rather attracted to our caravan and, well, demonstrated his affection. There was the time we rescued a lamb from underneath a cattle grid. The time my sister, my mum, and I were playing on a beach and my dad casually came over and told us that the island just off the coast nearby was where anthrax was from‚ÄìI should add that my dad strongly denies that this story is true. I suspect his memory may be more accurate than mine, but my story is much more memorable and so it’s the one that sticks.
Perhaps the most vivid memory I have is the time my mum insisted that my sister and I accompany her on a swim in the loch. I remember it being a clear and sunny summer’s day. We were parked up on the edge of the loch, far enough away from other campers to feel that we were alone. The water must have been cold but I don’t actually remember that. I do remember how clear the water was, if only because it made seeing the jellyfish so much easier. By the time we realised how many there were, we were in the middle of a bloom of jellyfish. It was like a scene from Finding Nemo, except we were too big to bounce over the jellyfish. Most vividly of all, I remember following her as she found a safe path through the jellyfish. Later, some other campers told us they had seen a shark in the loch, too.
At the time it felt like an epic adventure and a narrow escape, but I’m sure in reality it was much more mundane; I’m not even sure if the shark part was true. But it makes for a good story, and it always makes us laugh when we tell the story at family get-togethers, and for me that’s a big part of what family holidays are about; creating new memories that will soon pass into legend and makes us laugh for years to come.
-Sarah Jackson
Junior Girl
Girl Museum Inc.
DONATE NOW