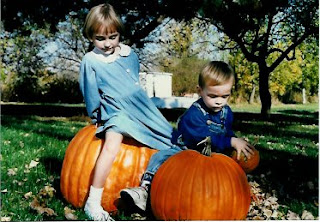 Hillary and her brother, with some not-so-giant pumpkins grown in their garden.
Photo courtesy of author.
One of my favorite things about summer vacation was always gardening. Sometime in May each year we would start sprouting pumpkins seeds in the house, and I knew that it was almost time for school to end. When the weather here in Michigan warmed up enough, we made small hills of dirt in our garden to plant the seeds in. Then, for the rest of the summer we waited, watched, weeded, and watered.
We always grew other things besides pumpkins. It was great having fresh green beans to snack on and yummy squash that my mom would cook for dinner. But the pumpkins were what we patiently waited for. Even as little kids, my brother and I would drag the hose all the way to the back of the yard to water the pumpkins. I learned a lot as a little girl in the pumpkin patch. We would check the flowers for cucumber beetles, which we knew were bad for the pumpkins. I learned that lightening storms were good for the plants because it provides nitrogen. I learned to pick off some of the smaller pumpkins so that all of the plant’s energy would go to the bigger ones, resulting in giant pumpkins.
Suddenly, summer would come to an end and I would head back to school. But the pumpkins were not done growing. Later in September, it would start to get cold again and then it was time to harvest. We would bring our saws to the garden to cut through the thick vines. My little brother and I would work together to heave the big pumpkins onto the trailer. Our dad would have to help with the really big ones. Sometimes, we would have competitions against my cousins, who also grew pumpkins, to see who could grow the heaviest one. One year I was sneaky and hollowed one out to fill it with sand so that it would be surprisingly heavy. Following the pumpkin weigh-in came the best part: carving Jack-o-Lanterns! When you have a giant pumpkin, there is a lot of room to get creative. Sometimes we had pumpkins so big I could fit inside it. We would work hard scooping out all of the seeds and goo from inside, then get to work designing a masterpiece. Then the pumpkins would be displayed on the front porch as we counted down to Halloween. Almost every night during the fall, my mom would read Jeb Scarecrow’s Pumpkin Patch¬†to us before bed. I always liked little Jeb Scarecrow because he took such good care of his pumpkins just like I did. I hope to someday grow giant pumpkins again with my own children, as it is such a great learning experience.
-Hillary Hanel
Junior Girl
Girl Museum Inc.
DONATE NOW