Poster Girls: A Century of Art and Design at the London Transport Museum celebrates a century of exceptional poster art created by women. The exhibition shines a light on the incredible contribution that female designers and artists made to the world of poster design, with over 150 colourful, fun and unique pieces of artwork on display.

Posters are displayed chronologically from 1910s to the present day; with a focus on how each new era offered changing styles, approaches and designs which are reflected in the artworks. The display also focuses on the positive impact London Transport had in showcasing female talent in an industry that was, like many others, predominantly male.

Creative minds such as Ella Coates, Nancy Smith, “Herry” Perry and Dora Batty created bold, colourful, eye-catching posters to advertise the London Underground as quick and cheap transport choice. Many of the posters would market the Capital’s main attractions, like this one featuring Kew Gardens by Margaret Calkin James. 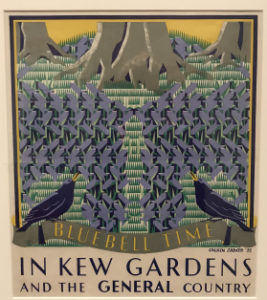 The exhibition continues downstairs; documenting posters from the 1950’s to the modern day. The first thing you see is a wall covered in miniature versions of underground posters which was truly sensational.

As you look closer you can pick out posters marketing everything from London Zoo to Borough Market, Hampton Court to London Museums.

Although there was a lull in female representation during the 1940s-50s (possibly due to World War II), in the 1980’s, London Transport ran two major campaigns to reignite the fire for women in the Poster design market. Art on the Underground and the Simply series was influenced a lot by women and they play a major role in poster art and design. My three favourite contemporary posters were: Simply East London by Tube and Bus by Sarah McMenemy, 2000 (2000/14610), Borough Market by Ruth Hydes, 2010 (2017/444) and Winter Fun – shopping by Anna Hymas, 2016 (2017/380). 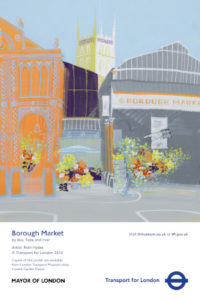 Aside from the #Vote100 Suffragette displays that keep popping up across the UK to celebrate 100 since the Representation Act 1918 was passed, Poster Girls is the first exhibition I’ve been to that it is solely dedicated to the work, perspectives and successes of women. Isn’t that absurd?! I felt pretty overwhelmed walking around and taking notes knowing that everything I was seeing was created by a woman, every name I wrote down belonged to a woman.

I think the sector could learn a lot from the London Transport Museum in terms of how to create exhibitions focused on underrepresented groups in society. From writing more inclusive interpretation, doing more in-depth research into collections, looking at how exhibition content is developed, who/what is represented and ultimately, who at the top of the organisation, is making the decisions about what is exhibited…

Poster Girls: A Century of Art and Design, located in the Exterion Media Gallery, is on display until January 2019.