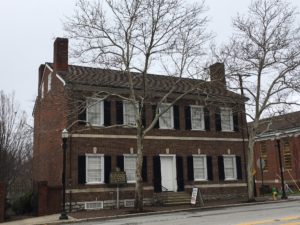 I recently visited the Mary Todd Lincoln House, and I can sum up my visit in one sentence: It was fantastic!

On first glance, the house seems a bit diminished given Mary Todd’s standing in history. Surrounded by modern development in downtown Lexington, it looked like a normal house.

The only way to see Mary Todd’s house is by guided tour. Starting in the front parlor, our docent used each room to discuss Mary Todd’s life and her family. The entire tour centered around Mary Todd, and I could not have been happier. Our docent was knowledgeable – having read nearly every book there is on Mary Todd. He separated the facts from his own opinions, stating how he had come to those conclusions. It was clear he knew Mary Todd better than most scholars I have met.

Did you know Mary Todd wasn’t a dark-haired, exotic beauty? Neither did I.

Looking at her portrait, I never guessed that the blonde, blue-eyed beauty wooed Abraham Lincoln. Her portrait also betrays her true beauty: wit, charm, intelligence, and one of the best educations of her time. 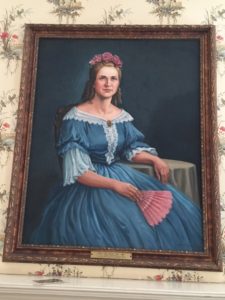 As demonstrated by our guide again and again, Mary Todd’s legacy doesn’t reflect her truth. She was strong-willed, intelligent, and had a fiery temper that put fear into even Abraham’s heart. She knew exactly how to behave at all ranks of society. She was also a compassionate, loving, and supportive wife and mother. The more I heard about Mary Todd, the more I felt she embodied a modern woman more than the stereotype of her own time.

Mary Todd experienced great tragedy. She lost all but one child, saw her husband’s assassination, was ostracized as First Lady, and committed to an insane asylum by her only surviving child. Yet through it all, she had a strength and authenticity that we often don’t hear about in historical narratives of women. Our guide was open about the realities of Mary Todd’s life: depression, ostracism, and a family divided by war. She overcame drug addiction, traveled and lived in Europe (where she met Queen Victoria), and won a court battle for her sanity and estate.

Mary Todd’s life is fascinating. Yet what I enjoyed most was our guide: his humor, authenticity, and adherence to separating fact from opinion. He is a great example of how historic home tours can be meaningful experiences. My experience at the Mary Todd Lincoln House was transformative and left a lasting impression. At the end of the tour, our docent explained the benefits of each book on Mary Todd, so that I could pick out the best one.

If you’re ever in Lexington, Kentucky, take a few hours to stop in and see Mary Todd. I promise you won’t regret it.