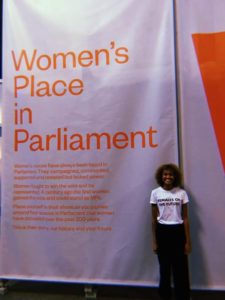 In light of the progressive movement in American politics at the beginning of November regarding the historical milestones made by women in the midterm elections, I thought I would share an insight into the wonderful Voice and Vote: Women’s Place in Parliament exhibition I visited last month. When I left the British Museum earlier this year, I was kindly gifted membership to the Women’s Library as part of my leaving present (alongside tickets to see my idol, Stacey Dooley and an array of feminist goodies!). The Women’s Library LSE, based at London School of Economics, holds 500 archive collections and a significant museum collection of over 5000 objects, much of which dates from the late 19th century.

My first Women’s Library event was a trip to Westminster to visit the ‘Voice & Vote: Women’s Place in Parliament’ exhibition. The tour was led by Mari Takayanagi, Joint Project Manager of Vote 100 and a fellow Women’s Library member. The major exhibition displayed at Westminster Hall was created to give visitors a better understanding of the campaign for votes for women in the UK and the representation of women in UK Parliament and politics.

The exhibition was split into 4 main sections: The Ventilator, The Cage, The Tomb and The Chamber. All 4 settings were significant in the ways that women could engage with and influence UK politics; from being secret observers in the 19th century to being active and present Member’s of Parliament in the present day.

The opening section of the exhibition introduced the octagonal structure known as The Ventilator which was originally designed to ventilate the Chamber in the House of Commons. 200 years ago, before it was acceptable for women to be actively involved in politics, a group of feisty, politically-minded middle class women found a secret attic space above the Ventilator and would clamber inside to listen to the debates going on below. This not only gave women a space to socialise but also the chance to listen to political discussions and gain an insight into policy-making like never before. 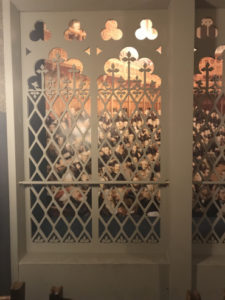 In 1834, a large fire demolished the original Westminster building leading to a new Palace being built between 1840 – 1876. The new Palace of Westminster included a purpose-built ‘Ladies Gallery’ which meant that women could officially listen and watch debates in the Houses of Common rather than hiding in the Ventilator.

The Ladies Gallery was nicknamed ‘The Cage’ because it had large, heavy metal grilles covering the windows, both restricting the women’s view and ensuring they didn’t ‘distract’ men in the Public Gallery. In the 20th century the space became known for protests by suffragettes campaigning for change and the metal grilles were eventually removed in 1917.

The reconstruction of the Ladies Gallery in the exhibition gave a sense of the rules, space and views that women would have experienced whilst listening to parliamentary debates from their newly designated area. The cream paneling represents where the heavy grilles would have been.

In 1919, Nancy Astor became the first female Member of Parliament to sit in the House of Commons. When she joined as a MP there were no spaces reserved solely for women except for the Ladies’ Members’ Room. During the 20th century, more women were elected into Parliament resulting in women from Conservative, Labour and Liberal parties sharing the small Members’ Room. The cramped space soon became known as ‘The Tomb.”

As women’s voices and voting rights in the UK have increased, so has their role in Parliament and there have now been 491 female Members of Parliament in Britain; all of which were displayed on a large celebration wall in the final part of the exhibition.

Visitors were invited to watch videos and listen to oral histories, collected from The British Library, of current female MP’s talking about their political role and their continuing fights for equality. The space highlights both how far we’ve come in terms of female representation in Parliament and voting patterns versus how far we’ve still got to go (a third of UK women didn’t vote in the 2017 UK General Election!) The exhibition ended with a pledging station where visitors could reflect on their place in politics and decide how they could get more involved in UK Parliament in the future.